Big wall belay stations are much more complicated than a standard multipitch belay. You need to tie yourself in securely, fix the lead rope so your partner can jumar it, and set up a hauling system – all without your ropes getting clustered around each other.

There are many ways to set up a belay; the following is VDiff's favourite.

Note: Unless you're standing on a ledge, you'll use your aiders to move around the belay while you set it up. These are omitted from the following diagrams for clarity. 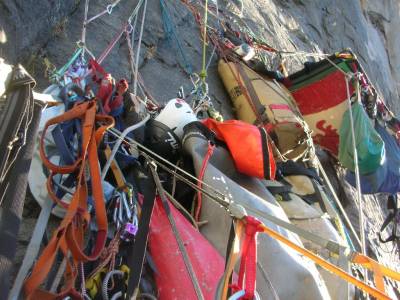 Most belays on popular big wall routes are equipped with two or three bolts. If not, you'll have to build a gear anchor – more on that later.

Begin by clipping a screwgate carabiner into each bolt. Then clip a cordelette (we recommend using a seven meter length of 8mm cord tied with a double fisherman’s knot) into each carabiner.

Pull all three loops of the cordelette down and equalize it with an overhand knot. Clip a large screwgate into this central point and fasten all four screwgates.

These carabiners will stay locked for the whole time you have the belay set up. You will clip other carabiners into these rather than tying knots directly onto them. This way, you won't end up with something stuck behind something else (e.g. the leader unable to leave the belay because the haulbag is weighted on their tie-in point). 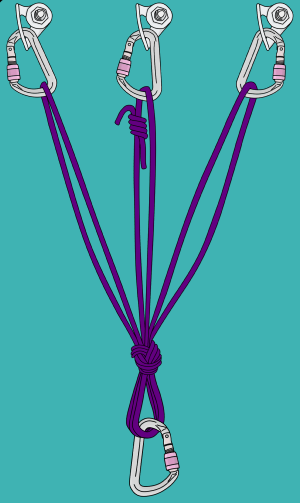 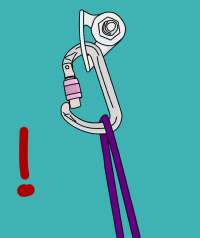 You'll also never weaken the belay by opening one of the main screwgates (when weighted, some screwgates will open but not close).

Make sure your V-angle is less than 60 degrees. With widely spaced bolts, you may have to extend one of them with a sling.

If there are only two bolts, you can 'double up' your cordelette on one of them to keep your central point within reach of the bolts.

It's better to position your screwgates with the wider side down, so you can fit more carabiners onto it later.

What do you do if there are no bolts?

If you're building a big wall belay from trad gear, you still want two or three points which are EACH as strong as a bolt. Three medium sized cams or nuts (well placed in good rock) equalized together are about as strong as one bolt (approximately 25kN), so the whole thing will contain at least six pieces of gear. You'll probably need to equalize some of these using a sling before attaching your cordelette. 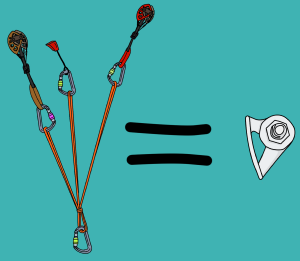 The Big Wall Belay - Step 2 - Tie Yourself In

You need to tie into your central point as you would on a normal belay, but leaving enough slack to haul with (approximately 5 feet). Your weight will be taken by your daisies or the hauling rope while you're hauling, not on your tie in – this is just there as your full-strength back-up.

Tie the lead rope in to the central point on a separate screwgate, using a clovehitch and back it up by clove-hitching the lead rope, with a little slack, to one of the bolts (with another screwgate). To keep the belay de-clustered, do this on the opposite side to where you will fix the lead rope for your partner.

You can use other knots, such as an alpine butterfly, but clovehitches are super easy to adjust.

At this point you can tell your belayer that you are 'safe'. They can take you off belay.

Your second will jumar up your lead rope – you don't belay them as you normally would on a multipitch. This rope needs to be 'fixed' so it's secure for them to jumar on.

Pull up the extra lead rope until it's tight on your follower and stack it away on a sling or a rope loop. They may need extra slack if there's a lower-out at the start of the pitch.

Fix the lead rope by tying a large-looped alpine butterfly to one bolt and a clove hitch to another bolt so that the rope is equalized. Make sure this is in the correct direction for the pull that the second will put on the rope whilst jumaring.

Now you can tell your follower that the 'lead rope is fixed'. At this point they can attach to the rope with their GriGri and jumars. 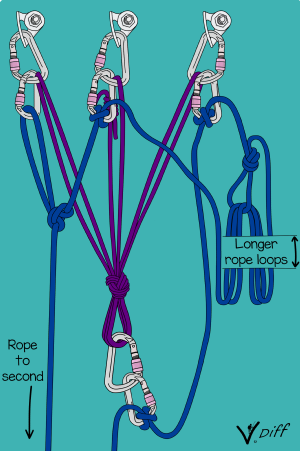 The Big Wall Belay - Step 4 - Set Up the Hauling System

First, clip your hauling pulley to the central point with a screwgate.

Slot the haul rope through the hauling pulley, close it and push down the catch, so the teeth bite into the rope. Keep the end of the haul rope connected to your harness while you do this, so there's no chance of dropping it.

Now that the haul rope is connected, you can unclip it from your harness. You can clip this away onto a bolt.

Pull the slack rope up through the hauling pulley until the rope is tight on the haul bags, stacking it away in a sling or loop of rope.

Make sure your rope is the correct way around, so that the pulley will hold as you pull the bags up. 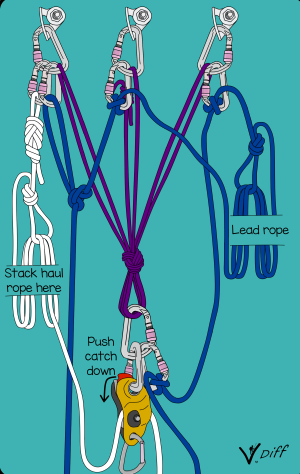 Some hauling pulleys (such as the older style Petzl ProTraxion) must have a carabiner clipped through their base to stop them from potentially opening mid-haul. Read the instructions with your pulley to see if this is needed.

Get ready to haul by putting the slack end of the haul rope through your GriGri and attaching this to your belay loop. You can sit back on this rope to pull extra slack out of the rope.

After a final check of your hauling setup, you can tell your follower that the 'haul rope is ready'. They can then release the haul bags on to the haul rope and leave the lower belay.