'Essential Knots: The Double Bowline' is part of the book - Sport Climbing Basics.

The double bowline is commonly used to secure the end of a rope around a large object such as a tree. It can also be used to tie the rope into your harness.

How to Tie the Double Bowline

Step 1
Wrap the end of the rope around a tree or other suitable object. Form two loops in the rope as shown.

Step 3
Pass the end around the back of the knot and push it up through the new loop as shown.

Step 4
The double bowline is now tied, but needs a stopper knot to be complete. Tie a half fisherman's by passing the end of the rope around the main strand twice.

Step 5
Finish the stopper knot to complete the knot.

Warning
The double bowline is great for tying around a tree or boulder as part of a top-rope anchor.

Some sport climbers also use the double bowline for tying in because it’s easy to untie after multiple falls. However, it has been known to untie itself, especially if the rope is stiff. This is due to lots of movement in the rope as you climb. We recommend the figure-8 as a much safer alternative for tying into your harness. 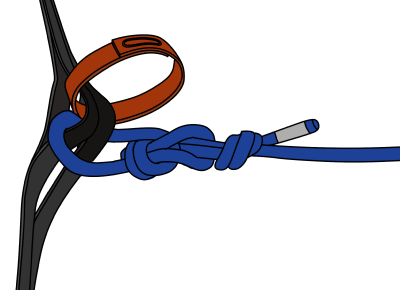