This article is part of the book - Trad Climbing Basics.

Your rope is the main part of the climbing system. Climbing ropes connect you, via your harness, to the gear in the wall or rock and to your climbing partner.

Climbing ropes are available in a variety of lengths, types and diameters. There are made of two parts; an inner core and an outer sheath. 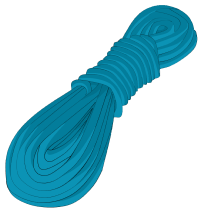 Most beginners start with a single rope. They are thick, durable and easy to belay with. Single ropes are marked with a '1' symbol at the end of the rope. A 60m length with a diameter of between 9.4 – 10.2mm will suit most beginners and last well into your climbing career.

Many trad climbers use half ropes (also known as double ropes) instead of a single rope to help reduce rope drag on wandering routes. They also double the length of the abseil you can make - essential for epic retreats! Safety is increased on complicated terrain where there are sharp edges that risk cutting the rope. If one rope is cut, you still have the other to catch you.

Half ropes need to be used as a pair - climbing with just one isn't safe. Half ropes are marked by a ½ symbol. 60m ropes will be great for most trad routes. When buying half ropes, make sure the colours are very different. Ideally, you will be able to tell them apart in the dark.

Twin ropes are designed to be clipped together into the same carabiners as you climb. It's important not to get these confused with half ropes; twin ropes cannot be clipped to gear individually.

Static ropes have very little stretch, so they cannot absorb the force of a fall like other ropes. They are mainly used as a 'fixed' rope to ascend or descend. They are usually marked with a EN1891 code. Never lead climb on a static rope!

Things To Consider When Buying a Climbing Rope

Number of Falls
Every climbing rope is rated for a certain number of falls. This is the number of falls using a specific test which indicates how many falls a rope can take before it breaks. Every UIAA certified rope is tested far more severely than you are likely to experience when climbing, so you don’t need to retire your rope just because it’s rated to six falls and you’ve taken seven.

In real climbing situations, a rope will withstand hundreds of falls. They don’t fail unless they run over a sharp edge of rock, which cuts it, or if they have been stored amongst sharp objects or acidic chemicals such as bleach or leaking batteries. They do, however, wear out over time, especially if you take a lot of falls.


Maximum Impact Force
Ropes stretch to absorb energy. The more energy a rope can absorb, the lower the force on your protection.

This isn’t much of a concern for sport climbing, where protection is always bomber bolts. However, for trad climbing, a rope with a low impact force will generate less force on your gear, making it more likely to hold the fall. Lower impact forces are better.

After a fall, let your rope “rest” for five minutes to recover its elasticity. If you get straight back on the rock and then fall immediately, the impact forces will be much higher.

Dry Treatment
Some climbing ropes are made with a special dry-treatment which helps to prevent water being absorbed into them. This means they will be safer in wet conditions then an untreated rope.

The treatment also helps to stop dirt and sand getting into the rope's fibers, which means the rope will run across the rock and through carabiners with less friction than if it was untreated. It's worth the extra cost for a dry treated rope if you plan on climbing in wet/snowy environments. 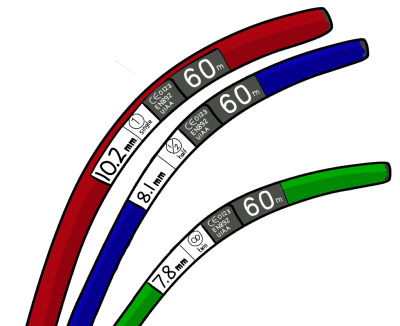 Diameter
Climbing ropes come in many different diameters. Basically, thinner ropes are lighter and thicker ropes are more durable. Be aware that the diameter of your rope may affect which belay devices you can use it with. Some devices are not compatible with very thin or very thick ropes.

Single rated ropes can be as thin as 8.5mm, making them great for alpine routes. Skinny ropes are safe – they pass the UIAA lab tests. But at the crag, they are more susceptible to abrasion on rough rock or being cut over a sharp edge.

For high-use situations (e.g: big walling, top-roping or working a sport route) a thicker, more durable rope is much better. Your rope is your most critical piece of gear – it’s better to carry a bit more weight than to skimp on safety.


Middle Markers
Most ropes have some kind of mark on their sheath to identify the middle. This is useful in many situations such as gauging how much rope a leader has left, or when setting up an abseil where you need the rope to be perfectly centered at the anchor. Some ropes even have a different colour or pattern on each half to identify the middle.

Remember that if you shorten your rope (such as to remove a frayed end), the middle marker will no longer be correct.

How To Extend Your Climbing Rope's Lifespan

- Keep it out of the dirt. Grains of rock and sand can cut tiny fibres inside the rope.

- Keep your rope away from sharp edges and loose rock by extending your gear.

- Store your neatly coiled rope in a cool, dry place out of direct sunlight and away from acidic chemicals.

- Only use it for climbing.

How To Inspect Your Climbing Rope

You should check your rope for damage frequently. Starting at one end, feed the rope through your hands, looking and feeling for non-uniform sections. Things to look out for:

A slightly fuzzy sheath isn’t a problem. However, severe fuzzing may make a rope unsafe. As a general rule, if you can see a rope’s inner core, the sheath has worn too thin and you should retire the rope.

If your rope is damaged, it should be retired. Make a nice rug out of it, or use it as a washing line. 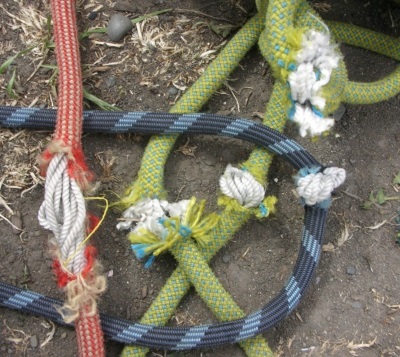 One thought on “Climbing Ropes”