A multi-pitch route is one that is split into two or more pitches. This may be because it is longer than your rope, or it could be a wandering route that would involve a lot of rope drag if climbed as a single pitch.

Due to the length and complexity of multipitch routes, you should develop your problem solving and self-rescue skills before embarking on this kind of adventure. Learn more about problem solving.

Multi-Pitch Sport Climbing: What To Bring

On long multi-pitches, it's wise to bring the following equipment in addition to everything you would normally take on a single pitch.

If the descent from your route involves abseiling, make sure to bring ATC style belay devices and prusik cords.


Route Description
On a single pitch, it's easy to remember where to climb. However, on a multi-pitch you may have forgotten the details by pitch six, particularly if two different routes branch off the same anchor.

Bringing the whole guidebook is a bit excessive. But a route description (or topo), neatly folded in your pocket, will help show you the way.

Clothes
Any comfortable all-cotton clothes will suffice for single pitch cragging, especially venues with a short approach. For multi-pitch routes, or for any climbs with a long approach, wearing synthetic clothing is a better choice. Synthetics insulate much better than cotton in wet or cold environments.

If you expect cold temperatures, bring a pair of gloves so you can belay with warm hands and then take them off to climb. A thin hat that fits under your helmet is a very lightweight way of keeping you warm too. If the descent is long, it's nice to bring a comfy pair of shoes.

A warm/waterproof jacket, or even a thin wind-proof layer, can make multi-pitches more comfortable when it gets windy and the sun disappears, especially for the belayer.

Down jackets are a poor choice unless you’re climbing in dry climates below freezing. Most down jackets will repel a small amount of moisture, but the feathers will clump together in a storm and you’ll freeze. They also tend to rip very easily on rock.


Headlamp
Headlamps are essential on long multi-pitches. Finishing a climb, or trying to descend in the dark can be incredibly difficult and dangerous.

The VDiff team once got stuck 200 meters up a multi-pitch in the dark with no food, water, jackets or headlamps. It was a long, cold night.. Read the full story here.


Food and Water
If your multi-pitch is likely to take more than a few hours, consider bringing food and water to snack on at the belays. Many routes have luxury belay ledges, so if you're not in a rush, why not have a vertical picnic?


Extra Rope
You’ll need to bring a second rope if your route involves an abseil descent where the anchors are more than half of your rope’s length apart (i.e: you can only abseil 35 meters with a 70 meter rope). You will also need a second rope if climbing as a team of three.


Backpack
All this stuff can be put into a small backpack and carried by the second.

Depending on the route and your tolerance of suffering, you may not need any of it. For routes that are difficult to return to the base, you'll need to bring everything up the route with you. Plan before you go.

Efficient belay changeovers will speed up your ascent, making you less likely to get benighted or stranded in a storm.

Sometimes the more experienced climber will lead every pitch. Other times, each climber will choose which pitches they prefer. A common tactic is to swing leads (lead alternate pitches). Be aware that easier pitches may be runout.

Swinging leads is the most efficient. The rope is already stacked with the new leader’s end on top and the gear from the previous pitch will be racked on their harness.

It’s much more efficient if both climbers can go hands-free during the changeover. How you do this depends on who will lead the next pitch. Two methods are described below.

When the leader is ready to climb, simply unfasten the knot and they will be on belay immediately.

This works well if there is a small ledge to stand on. If not, you may prefer to attach to the central point with a sling. 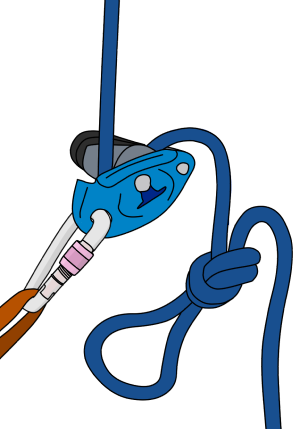 The Releasable Tie-Off
The above method of tying off a belay device works well for most belay changeovers.

However, if the rope becomes weighted when using this method (e.g: if the leader falls), it will be almost impossible to release the tie-off.

If there is any chance of this happening, you should instead use a releasable knot. 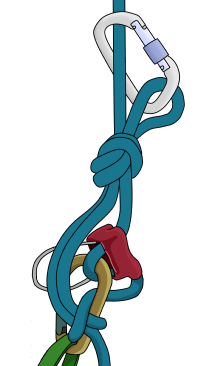 If the same person is leading every pitch, the second will have to attach to the central point. They can do this in the same way as the leader.

Use separate screwgates to attach the second's rope to the central point(s). When they are attached, they can be taken off belay.

Remember - The leader will need to be put on belay before they detach from the anchor. 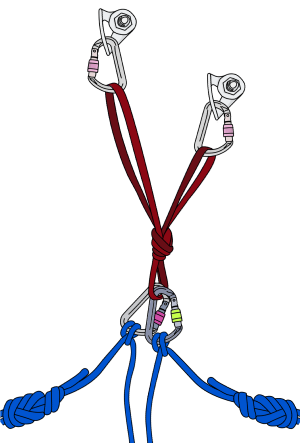 It's a good idea for the leader to clip an anchor bolt as their first piece of gear. This eliminates the chance of a factor two fall.

It's also much easier for the belayer to hold a fall this way. 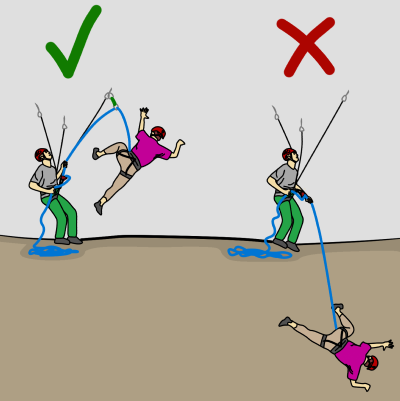 Stacking or coiling the rope neatly so it doesn’t tangle is important on multipitches. If the belay ledge has a flat area, simply stack the rope onto it in a place where it won’t slide off.

If there isn’t a suitable area to put the rope, you can stack it in neat coils across the rope which goes between your harness and the anchor (lap coils).

Alternatively, stack it through a sling. Either way, the first coils should be the longest, with progressively smaller coils added on top. This ensures the rope feeds out well on the next pitch.

If it is windy or there are bushes or loose rock below you, make sure to keep the coils short enough so they don’t get stuck. 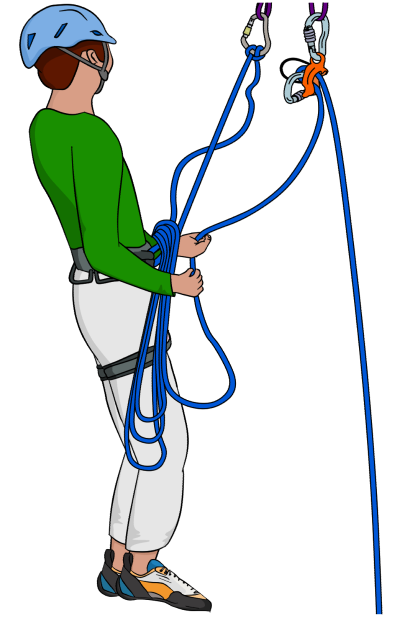 Make a realistic estimate of how long the route might take. Figure out what time you need to have finished the route (to avoid thunderstorms or darkness etc..) and then work backwards from there.

Break the climb down into pitches and figure out how long each one will take. Remember to add time for approaching and descending the route and for belay changeovers. Be conservative with your estimations – it’s much easier to lose time than gain it.

As part of your time budget, it’s smart to figure out places where you can switch to an easier route if you are running low on time, or places where you could easily descend without leaving most of your slings and carabiners behind.

In most situations, a pair of climbers is faster than a team of three. But having someone to chat with at the belay makes climbing as a three more social.

It also means you have an extra person to help carry the gear and lead some of the harder pitches. There are many ways to connect three climbers to the rope. Two popular methods are described here.

Step 1
The leader climbs a pitch with one rope.

Step 2
The second climber follows on that rope, but trails another rope (Both ropes are tied into the harness tie-in points).

The second climber unclips the quickdraws from the first rope and clips it to the second rope beneath them. This ensures the third climber is protected from a swinging fall if the pitch traverses.

If the pitch is straight up, the second climber could remove the gear.

Step 3
When the second climber has reached the belay, the third climber starts up.

The third climber removes the gear as they follow on the second rope. 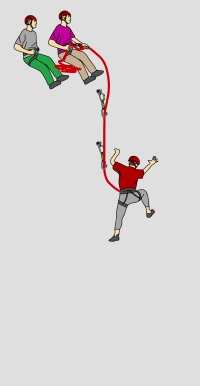 Step 1
The leader climbs with both ropes. They clip alternate quickdraws to each rope.

The leader can be belayed by both climbers with a GriGri each, or by one climber with an ATC.

Step 2
The second and third climbers follow, keeping around 5 meters apart from each other, while the leader belays them both at the same time.

It is highly recommended to belay with an auto-blocking belay device directly from the anchor, such as an ATC in guide mode.

When communicating, finish the command with the rope colour, so the belayer knows which rope you mean (e.g: slack on red rope!).

Common Mistake
Clipping both ropes into a carabiner causes the ropes to rub against each other if a climber falls while leading or following.

This could damage your rope or even cut through the sheath. 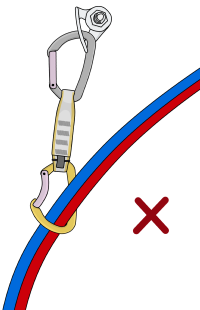 If you need to clip both ropes to a bolt (e.g: to protect both followers on a traverse), use two quickdraws of different lengths as shown.

These quickdraws are then removed by the third climber. 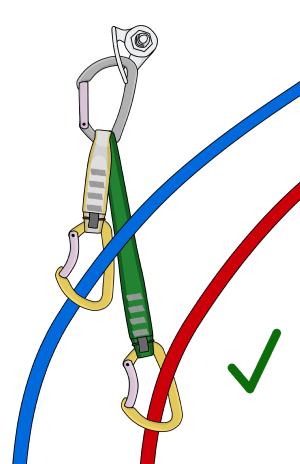 Attaching to the Anchor

Attach to the next anchor with two slings girth-hitched to your harness.

You can attach to the chains or the bolts to save space for your partner. 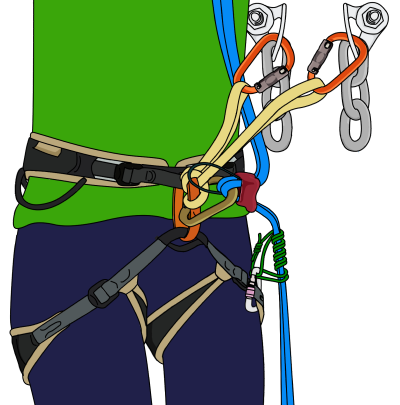 If there is only space for one climber to attach, the other climber can clip directly into their partner’s screwgates as shown. However, this means that the climber who descended last must descend first on the next abseil. 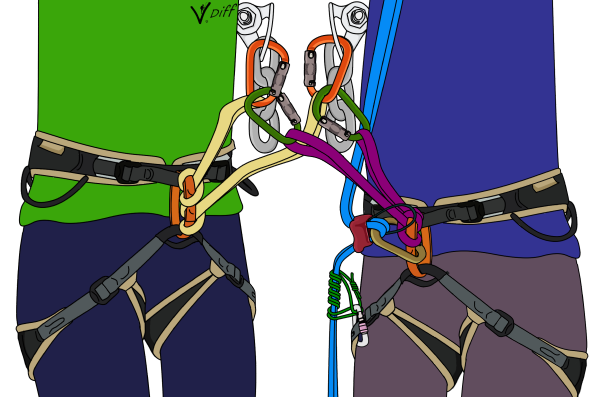 Once securely attached to the next anchor, you can remove your belay device as follows:

Step 1
Unfasten the screwgate. Unclip the device’s cable and both ropes from it.

Step 2
Re-clip the cable. This ensures that you can’t drop it. 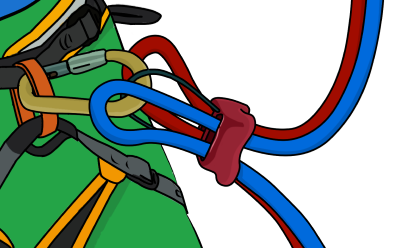 Step 3
Pull the ropes out of the device. 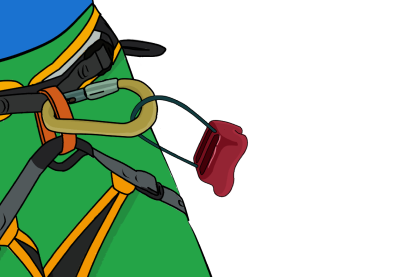 Thread the rope through the next anchor and tie a stopper knot in it before you pull it down.

Tie the stopper knot big enough so that it cannot fit through the main abseil point. This ensures that you cannot lose your ropes.

Alternatively, tie the rope to yourself so it cannot be dropped. 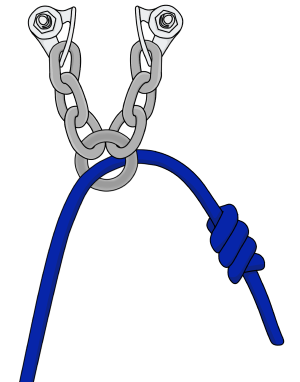