These articles about climbing techniques are part of the book - Sport Climbing Basics.

Climbing is like a dance. The aim is to choreograph different types of holds and moves into one fluid movement.

It is much more efficient and enjoyable to move up fluidly, methodically and in balance. Frantic, jerky movements are clumsy and will tire you out faster. Once this becomes second nature, you will soon begin to develop your own style and move on to more advanced climbing techniques. 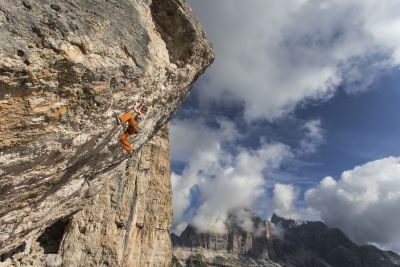 After climbing each route, review the techniques that you used. Ask yourself what worked, what didn’t and what you could do to climb the route more efficiently.

It’s impossible to pull straight down on a vertical crimp. Instead, these types of holds are used as sidepulls.

Lean from the sidepull and use your feet to oppose the force. This counter-pressure keeps you in balance while you use your legs for upward progress. Sidepulls often give you more reach than a horizontal hold.

You can sometimes turn a sidepull into a pinch if there is a catch for your thumb. This will create more inward pulling power if you need it. 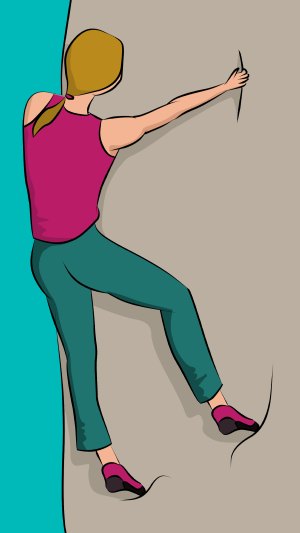 A gaston is the opposite of a sidepull. Push outwards on the hold with your elbow pointing away from your body. 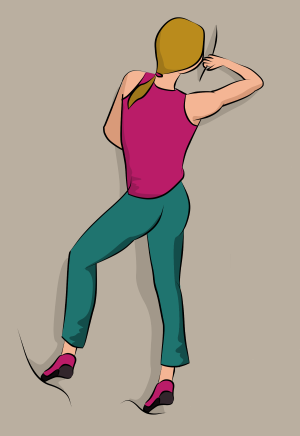 Palming is similar to an open grip but you use your palm instead of your fingers. You can push yourself into a corner by palming on both sides of it.

To stem, smear your feet on either side of the corner. The opposing pressure of pushing inwards keeps you in balance. 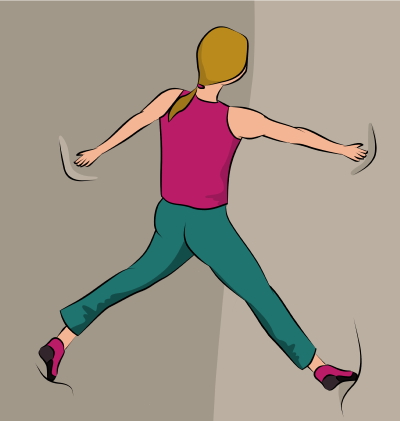 Underclinging relies on the counter-pressure between your hand pulling out from the hold and your feet pressing onto the rock.

This technique is often used to keep a climber in balance while searching for a better hold above.

On consecutive undercling moves, such as traversing under a flake, try to use footholds as much as possible and keep your arms straight. This takes the strain off your arms. 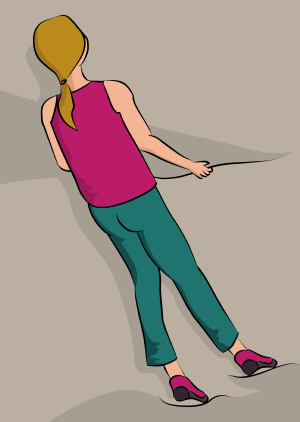 Mantling is the technique of surmounting a ledge when there are no holds above it to help with this (imagine getting out of a swimming pool without using the stairs). The following is a common mantling method, though many variations exist.

Step 1 - Step High
A high, well-placed foot is the foundation of the mantle. With your hands on the ledge, walk your feet up to the highest possible foothold. You may even be able to heel hook the ledge. 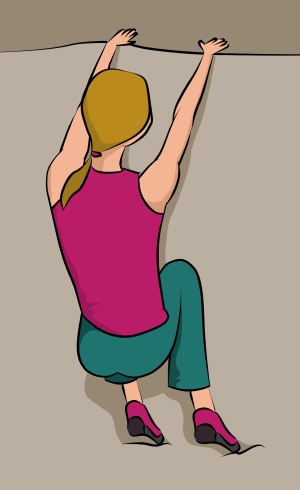 Step 2 - Pull and Press
Pull up and switch your hands to a palm down press. Search above the ledge for any hand holds. Leaning forward and pulling yourself in with one hand makes the next step easier. 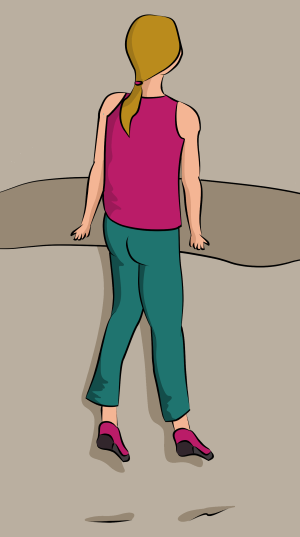 Step 3 - Foot Up
If your foot isn’t already on the ledge, you can probably put it there now.

You may have to shuffle your hands to make space for your foot. 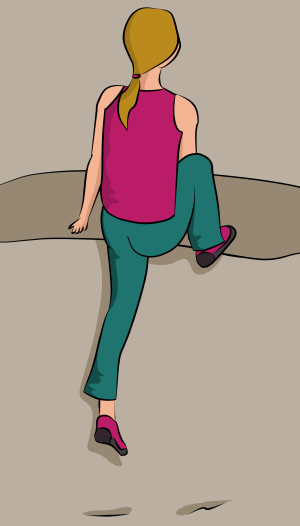 Step 4 - Rock Over
Shift the weight onto your high foot and stand up.

Try to avoid using the knee, as this will make it more difficult to stand up. 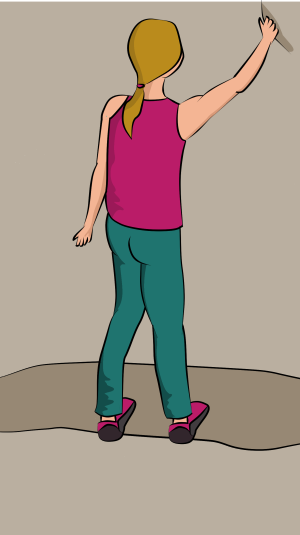 ‘Dynos’ are probably the most spectacular climbing move. It is a way of using momentum to reach between distant hand holds.It is almost always more efficient to move statically between holds, but if a hold is too far away, a dyno may be the best way.

Get your feet up high and focus on the hold. Push up with your legs and pull with your arms. Move your hand quickly towards the hold. Grab onto the hold when your body reaches its apex.

A dyno is much easier if you can keep your feet on the footholds. This way, most of your weight is still on your feet when you grab the hold.

The disadvantage of dynoing is that you cannot be sure how good the hold is until you’ve committed. And committing is the most important part of the dyno. If you make a half-hearted attempt, you’ll be unlikely to stick the hold. 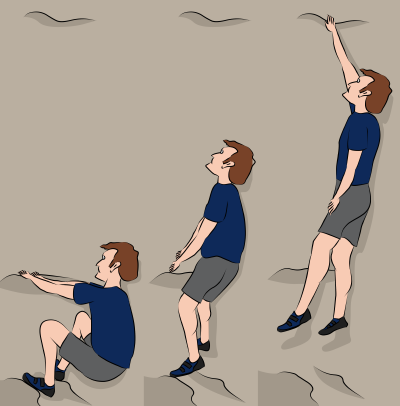 Your core is the area between your lower chest and your mid-thighs. Engaging the core while climbing keeps you in control.

Without a tight core, you are likely to ‘sag’ beneath your arms, causing you to lean out from the rock, butt first.

Climbing slabs (rock which is less than vertical) requires less strength and more balance than steeper angles of rock.

Your body should remain in the same upright position as when you’re walking. With gravity forcing the weight onto your shoes, you have more friction on the rock. Essentially, you will hold onto features for balance while pushing up with your legs. 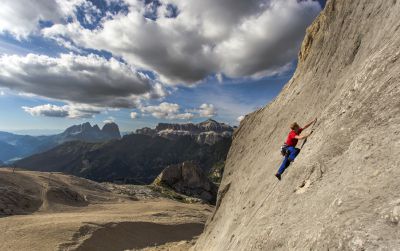 Friction slabs are generally devoid of any positive features to crimp or edge on. To climb a friction slab, you must rely on the surface contact beneath your palms and feet. Small steps are generally more efficient. High steps tend to disrupt the delicate balance needed to stop you from sliding off.

On sustained slab climbs, where most of your weight is on your feet, it’s common to get ‘calf pump’ or ‘disco leg’. Make use of any good footholds by standing with your heel on the hold and your leg straight, so that your center of gravity is over your heel.

It is invariably more strenuous on the arms to climb a vertical rock than it is to climb a slab of the same grade.

It’s much more efficient to keep the weight off your arms as much as you can. This is done by pushing your hips and chest close to the wall and by using the minimum amount of energy to complete each move as possible. Remember that your feet provide the upwards thrust, while your hands primarily pull you into the rock.

Keep your hips perpendicular to the rock by standing on the inside edge of one foot and the outside edge of another. This is known as back-stepping. It allows you to use footholds on either side of your body with either foot.

Take advantage of any rests. Opposing your feet against each other across a corner (stemming) allows you to keep the weight off your arms. If you can’t get a two-hands rest, then alternately shake out your arms when you find a good handhold.

It’s often better to do a series of small moves, instead of a long one. Being stretched out tends to disrupt your balance and often makes the next move more strenuous.

To climb efficiently on overhanging rock, you need to keep your hips close to the rock and your arms straight whenever possible. Bent arms will tire out much faster.

One way to do this is to use the dropknee. Place the outside edge of your shoe on a hold and twist your knee downward. Be careful though, dropknees put a lot of tension on the ligaments in your knee. 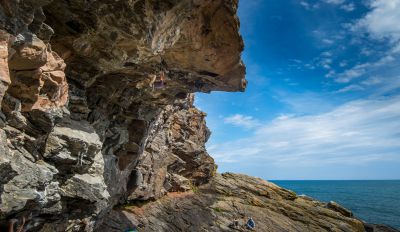 As with other angles of rock, it is more efficient to pull yourself into the rock with your arms and push yourself up with your legs. This is much more physically demanding on steep routes, but even the poorest footholds will help ease the strain on your arms and give you something to push from.