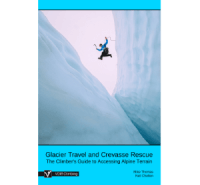 You will need to make an anchor on the glacier when:
- Performing a crevasse rescue
- Belaying/ abseiling across a crevasse or other tricky ground


Note
The anchors described in this section are made using equipment that you already have with you – ice axe, rucksack or ice screws. Anchors can also be made from gear which is designed as lead protection in snow, such as pickets or flukes. However, it is assumed that you do not have these more specialized items with you. 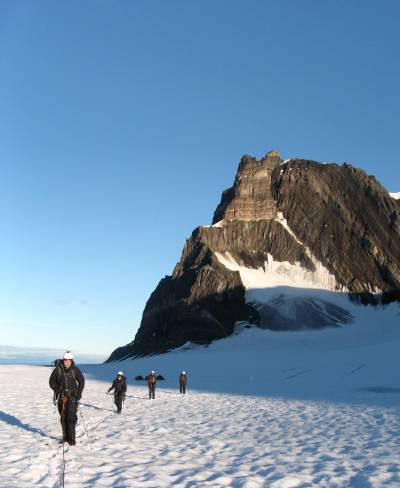 Snow Quality
The strength of a snow anchor varies dramatically depending on the snow type. For example; an ice axe buried in powder snow will be useless, whereas the same axe buried in hard snow will be bomber. With good judgement of the snowpack, the anchors described in this article will be sufficient for their intended use. However, this judgement is only developed with plenty of practice and experimentation in a safe environment.


Surface Area
Generally, anchors with a bigger surface area are stronger. An ice axe can work well in hard snow, but will not provide sufficient surface area for a secure anchor in soft, unconsolidated snow. A better alternative in this case is to bury a rucksack or a ski.


Be Precise
Precision is everything with snow anchors. A precise and well constructed anchor can be quite strong, with a sloppy one in the same snow being weak. It’s better to take a little longer making a good anchor that works, rather than rush one which fails halfway through a rescue.

Step 1
Use your pick to score a horizontal line in the snow exactly perpendicular to the direction of pull and slightly longer than the length of your ice axe. It is important not to disturb the snow in the area immediately in front of your anchor as this is where its strength comes from. 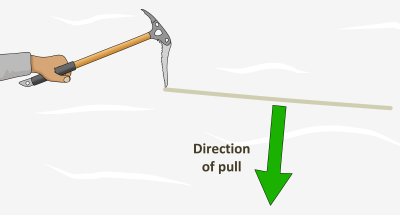 Step 2
Cut out a slot in the snow, using the initial scored line as a guide. 30cm is the minimum depth in firm, consolidated snow. If the snow is soft, you may need to dig deeper to find more consolidated snow. 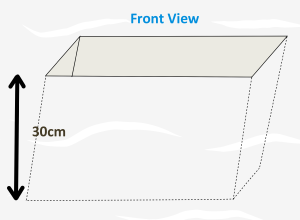 Make the front face of the slot uniform and slightly incut in relation to the direction of pull. This helps the axe to pull into the snow when weighted, rather than up and out. 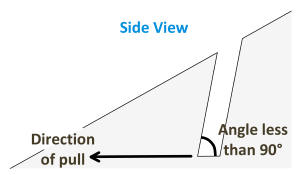 This slot only needs to be wide enough for a fabric sling, but deep enough so that it reaches to the very base of the horizontal slot. It must also be long enough so that when the sling is attached, the angle created pulls the axe into the snow, not upwards. 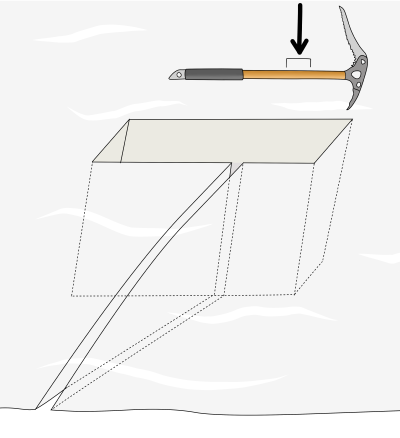 Step 4
Clovehitch a 120cm sling around the shaft of the axe at the previously identified point.

Then flip one strand of the sling over the shaft as shown. This causes the clovehitch to tighten up around the shaft when weighted. 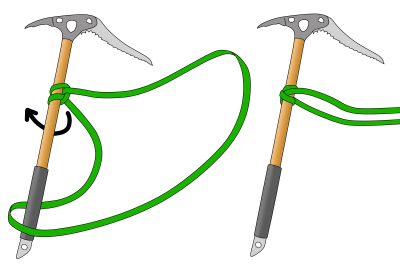 Step 5
Place the axe in the slot horizontally, with the pick facing down and the shaft securely up against the front face at the very base of the slot. Make sure the sling runs through the narrow slot.

Step 6
Backfill the slot with snow and compact it down. Be careful not to disturb the snow in front of the anchor. In some snow types this adds considerable strength to the anchor.

Step 7
Use the anchor with caution and avoid shock loading. 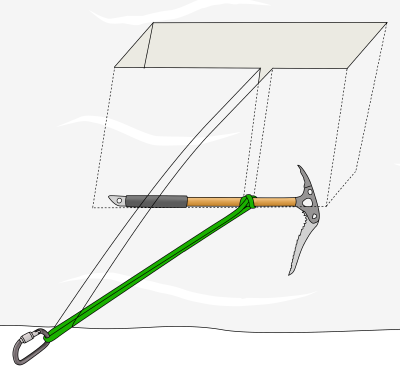 Reinforced Buried Axe
If you have a second axe available, you can slide it in front of the other axe, between the sling’s strands to reinforce it. This adds more surface area and improves the anchor’s strength. 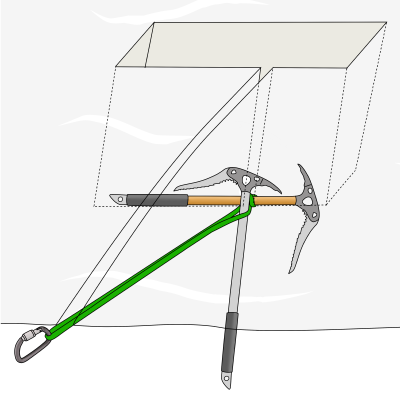 Anchors which are more suitable in softer snow include a buried rucksack or horizontal ski, with a sling girth-hitched around it. 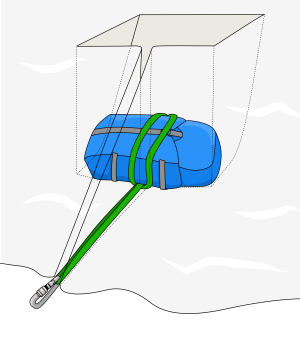 The principles of these anchors are the same as for burying an ice axe, but the item must be buried deeper. 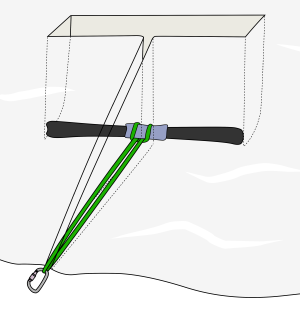 If you are using a ski, be careful to protect the sling from the ski’s sharp edges – these could cut the sling. Position the base of the ski against the front face of the horizontal slot as shown below, and pad the sling with something if possible.

A snow bollard is simple a snow anchor that can be used for abseiling. It would be the last choice when a rock or ice anchor is unavailable.


Step 1
Scribe out a horseshoe shape in the snow, with the opening pointing directly in the line of pull. It is usually best to make this about 2.5m at its widest point, but the size depends on the strength of the snow. In very hard snow, the bollard may only need to be 1.5m wide. Whereas in very soft snow it might need to be 3m. It is obviously better to make it too big rather than too small.

Be careful to make it a horseshoe shape, not a teardrop. A lot of the strength comes from the opening as it joins the snowpack. You are not aiming to make an isolated shape. 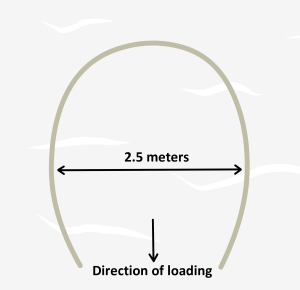 Step 2
Using the adze of your axe, cut a slot along the scribed line to form a horseshoe shaped trench. This trench should be a minimum of 30cm deep and should be in the firmest layer of snow. Be careful if digging deeper into softer snow because there is the danger that the rope could cut through the soft layer under the bollard. 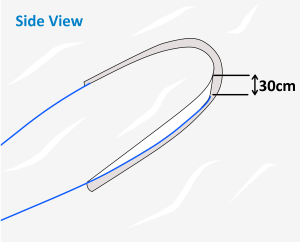 
Step 4
Try to test the bollard by committing your weight to it before the situation is consequential.


Step 5
Be very cautious when abseiling, particularly at the start. It is important to stay very low as the rope must not accidentally be pulled in a more upwards direction. It is often best to start the abseil on your knees or slither on your side to keep the load angle as low as possible. 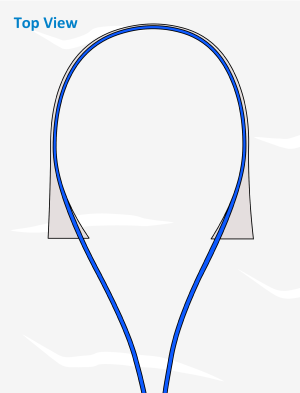 Important
- Do not disturb the snow in the bollard or immediately in front of it.
- The horseshoe shape should be a smooth curve – sharp angles are weak points.
- It is important that the bollard is slightly incut to prevent the rope rolling up and off.


Frozen Rope
The rope can occasionally become stuck around the bollard if it freezes or becomes buried in spindrift snow. The last person to abseil must check this.

Multiple People
If multiple people are weighting the anchor, it should be reinforced. Slot one or two axes vertically between the rope and the bollard. If only one axe is available, it should be at the back of the bollard. With two axes, place them at 10 o’clock and 2 o’clock as shown on the right. This reinforcement can then be removed by the last person to use the anchor. 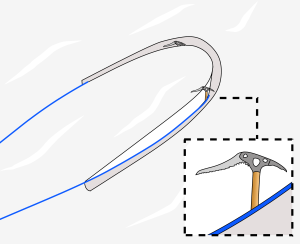