How To Abseil with a Damaged Rope is part of the book - The Trad Climber's Guide To Problem Solving.

If you climb long enough, you will inevitably end up having to abseil with a damaged rope at some point. Unfortunately, getting a core-shot (when the white core is visible) seems to be more common on long multi-pitch climbs where the terrain is blocky and the abseil descent is complicated.

How you solve this problem depends on the severity of the rope damage and where you are when it happens. 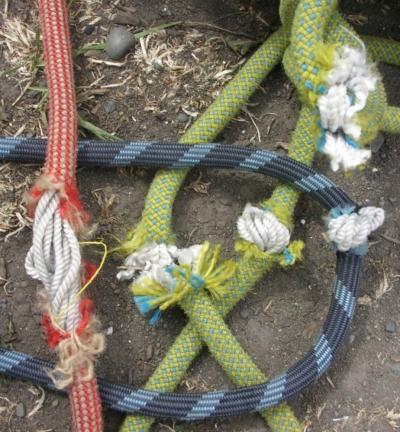 If it is more practical to continue up than descend (e.g; If you are ten pitches up a steep face, but only one pitch away from an easy walk-off descent), you can continue climbing on the longest section of undamaged rope. You’ll have to do shorter pitches, but this may be the best option.

If using the rope in a situation where it will not pass through any gear (such as hauling on a big wall, or moving together on a glacier), you can tie an alpine butterfly over the damaged section to return the rope to its full strength. 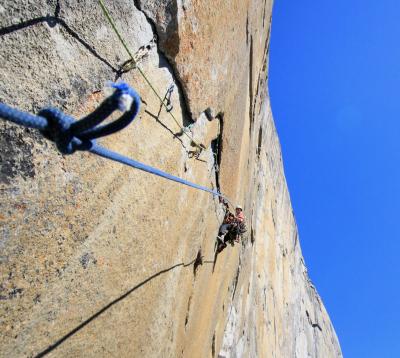 How to Abseil with a Damaged Rope

If a small amount of core is showing through the sheath, and the core is in perfect condition, you can wrap a piece of finger-tape tightly around this abraded section. This helps to hold the sheath together and prevent the core from being further exposed. Use just a small amount of tape so that your abseil device still feeds through easily.

It is not safe to lead on a damaged rope like this, whether taped or not. This technique is only suitable for abseiling. It enables you to get down safely, but is not a permanent solution. The rope should be retired afterwards.

Abseiling with a Core-Shot Rope

If the core is damaged, you’ll need to abseil on a single ‘good’ strand of rope, and treat the damaged part as the pull-down cord. You don’t need to cut your rope. Here’s how:

Step 1
Attach the rope through the anchor as shown. A figure-8 is shown in our diagram, but you could also use other knots (such as the overhand, figure-9, clovehitch or alpine butterfly). The point is to have a knot which physically cannot pull through or get stuck in the main anchor point.

The important part of this setup is to clip the rope back to itself with a screwgate carabiner to make a ‘closed loop’ around the main anchor point. This way, the system wouldn’t fail completely if the knot slipped through. You would, however, have to prusik back up to solve the problem.

The same setup applies if you are abseiling on two ropes. Tie them together and use the damaged rope as the pull-down cord. 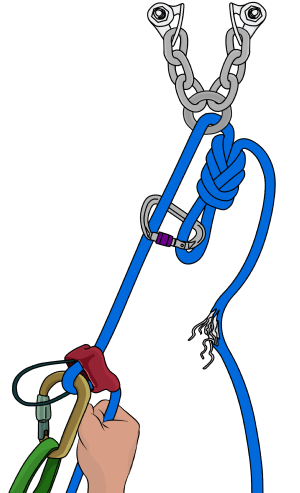 Step 2
Attach your abseil device to the good strand of rope.

Follow the same safety precautions as you would when abseiling at any other time: tie a knot in the bottom end of the rope, use a prusik and weight the rope to check the system before you commit to it.

Watch the setup as the first climber descends. If the knot gets jammed or slips through, you’ll need to tie a bigger knot or change the main anchor point to something smaller (small maillions/ quick-links are good for this).


Step 4
Pull your ropes down.

It’s possible that the knot and carabiner could get stuck. As when abseiling in a normal situation, keep an eye out for cracks and features where this could happen before you pull your ropes.

On a multi-pitch descent, remember that you will have to thread the same rope through each anchor.

Add slings and cordelettes to the end of the pull-down cord if you need a little extra distance on your abseils.

There will be less friction when abseiling on a single strand of rope, which can be harder to control. To make a smoother descent, see our article on increasing abseil friction. 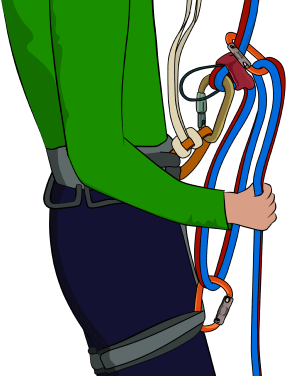 If both of your ropes are damaged, the best option is to salvage the longest section of undamaged rope as the ‘good’ rope and join the rest together as the pull-down cord. You won’t be able to abseil as far, but it is better than not being able to abseil at all.

Another option is to fix one end of the rope to the anchor and abseil on a single strand, passing knots on the way. You will not be able to retrieve your ropes, so this only works if your ropes reach to the ground.