This article about the quad anchor is part of the book - The Trad Climber's Guide To Problem Solving.

The 'Quad Anchor' is an anchor system which self-adjusts to keep an equal force on each anchor point. It can be better than other methods of equalizing in certain situations. 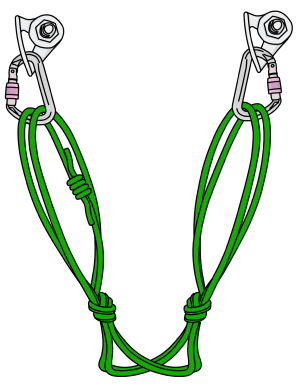 - Distributes the load equally between the anchor pieces. This puts less force on each piece, therefore decreasing the likelihood of anchor point failure.

- Provides two independent attachment points for the belayer and climber. This helps to prevent carabiners from jamming up at the same master point.

- The two attachment points adjust laterally, meaning that the anchor remains equalized even when different directions of pull are applied at the same time. This is useful during multi-pitch belay changeovers, or if the route traverses in or out from the belay.

- On multi-pitch routes where you have bolted anchors that are approximately the same, you can speed up your anchor building by keeping the quad tied.

- The quad will extend slightly should either anchor point fail. This can shock-load the remaining piece(s).

- Since the quad needs to be doubled up, it is difficult to equalize anchors where the placements are far apart.


Best Situation To Use The Quad Anchor

To equalize two bomber anchor points such as a two-bolt anchor.

How To Tie The Quad Anchor

Step 1
Double over a cordelette so there are four strands of cord. Make sure the double fisherman’s knot of the cordelette is near one end.

Step 2
Tie a ‘load-limiting’ knot on one side of the cordelette. This can be either an overhand knot or a figure-8 (The figure-8 is easier to untie after loading. The overhand uses slightly less cord).

Step 3
Tie another load-limiting knot on the other side and clip both ends of the cordelette to the anchor points with screwgate carabiners. Make sure the knots are fairly even when the anchor is weighted in the direction of loading. The four-strand ‘master point’ should normally be around 12 inches long.

These load-limiting knots minimize the distance the cordelette drops if one anchor point fails. The closer you tie these knots to the master point, the less shock-loading is applied to the remaining anchor point.

If the strength of your anchor points are difficult to assess (e.g: older bolts), you should move the overhand knots closer together. However, this also reduces the lateral range over which the quad self-equalizes. 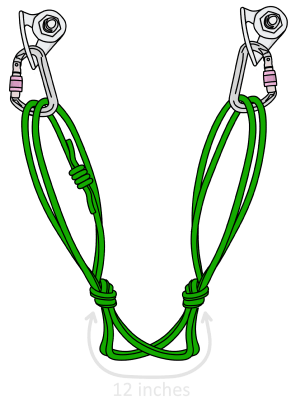 Step 4
Separate the four strands of the master point into two doubled strands.

Step 5
Attach yourself to two of the master point strands (using a clovehitch on a screwgate carabiner).

If belaying in guide mode, attach your belay device to the other two master point strands. 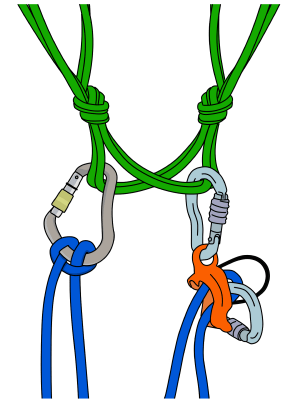 Warning!
It is important to only clip into two of the master point strands. If you clip into all four, you could become completely detached from the anchor if one point fails. 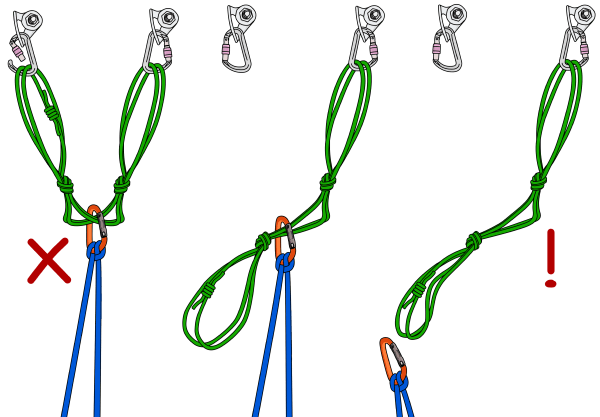 To equalize three anchor points, simply split one of the double-loops, attaching one loop into each piece. You will need to re-tie the load-limiting knots to equalize these pieces since they will probably be at varying heights.

Do the same with the other side to equalize four points. 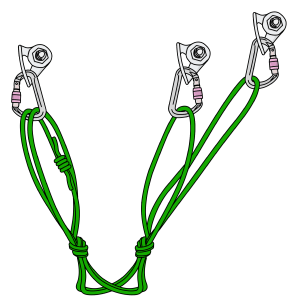 Sometimes it can be difficult to equalize three or four points correctly, as this uses up a lot of cordelette. In this case, consider equalizing the furthest away pieces with a sling to create two anchor points. Then attach your quad to those. 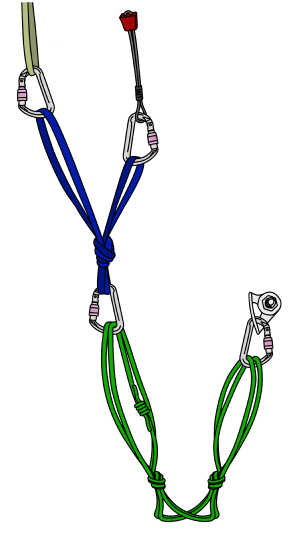 Using The Quad as a Top Rope Anchor

You can use the quad anchor to set up a top rope. This is useful if you want to top rope two different routes which are immediately next to each other, but share the same anchor. The quad will self-equalize for both of them without needing any adjustment.

As always, make sure your anchor meets the requirements of the six point rule before you set up a top rope.

Step 1
Clip a screwgate carabiner into two of the master point strands. 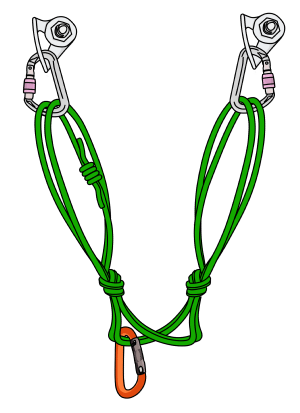 Step 2
Clip another screwgate into the other two master point strands. 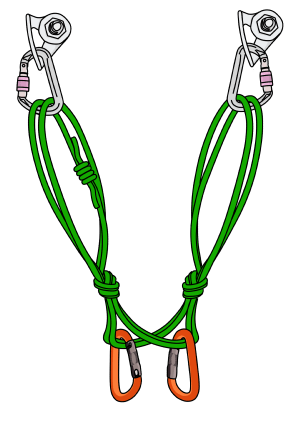 Step 3
Clip the rope through the screwgates and fasten them.

It is important not to clip a carabiner through all four strands (see above). 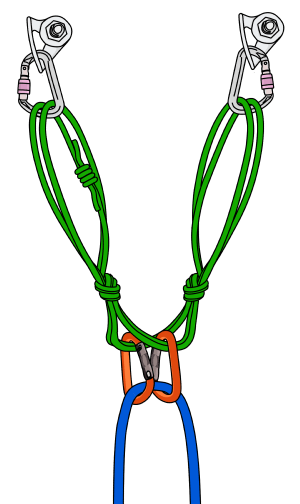