This article about the sliding-X knot is part of the book - The Trad Climber's Guide To Problem Solving.

Advantages
The main advantage of using a self-equalizing anchor is that it continues to distribute the load equally between the anchor pieces as the loading direction changes. This maintains a lower force on each piece, therefore decreasing the likelihood of anchor point failure. This is especially useful when equalizing marginal pieces of lead protection.

Disadvantages
The main disadvantage of using self-equalizing knots at the anchor is that if one piece fails, the whole belay shifts. This shift is barely noticeable on a well set up anchor. However, with some setups the sudden jolt could cause you to lose control of your belay device. Be careful where you use self-equalizing anchors and make sure to tie appropriate extension-limiting knots to reduce the possible sudden shift in belay position.

Example
If two micro nuts are equalized with an overhand knot as shown, it is likely that one of them would take most of the force of a leader fall.

This could be due to a slightly off-centre adjustment of the knot, or a slightly different loading direction (you may not fall directly downwards). If the fall generates 4kN of force, it will cause the 3kN piece on the right to fail. 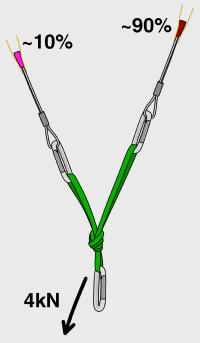 This will put 100% of the force on the remaining piece, which will most likely cause that to fail too. 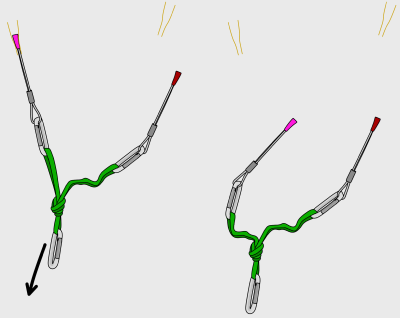 If the same two micro nuts were equalized with a sliding-X, the knot would self-equalize during the fall and distribute 50% of the force (2kN) onto each nut. The nuts would then be much more likely to hold the fall. 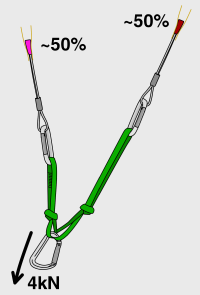 The sliding-X is useful for:

Step 1
Clip a sling through two pieces of gear.

Make sure the sewn section of the sling is near the top of one of the pieces so it doesn’t interfere with the sliding-X knot.

Step 2
Twist the sling 180 degrees and then attach a carabiner to it. The central point will now be equalized even when the pull comes from different directions. 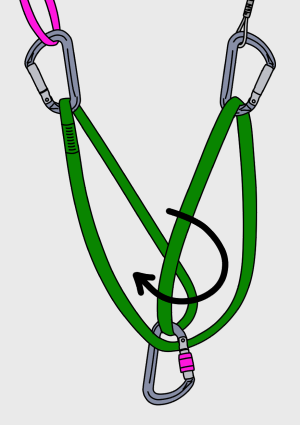 This is known as an extension-limiting knot. The closer to the central point you tie them, the less the anchor will extend if one piece fails.

Step 4
Clip the sling back into the piece. 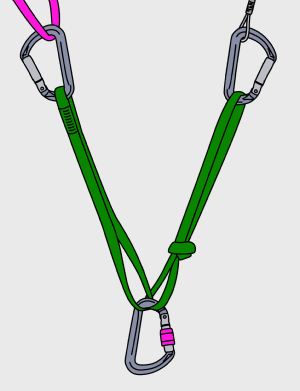 Step 5
Repeat steps 3 and 4 with the other side.

You can now adjust the overhand knots so they are as far down as possible while still allowing the central point to move freely where it needs to. 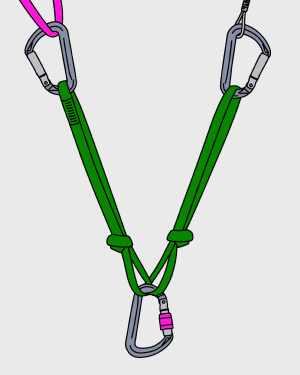 If one piece fails, the central point will shift as shown. 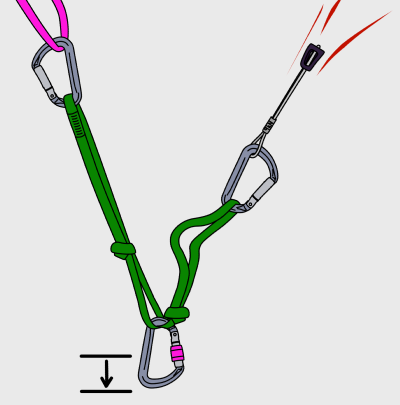 Warning!
1) It’s essential that you twist the sling in step 2. If you don’t, the central point can become completely detached from the anchor if one piece fails. 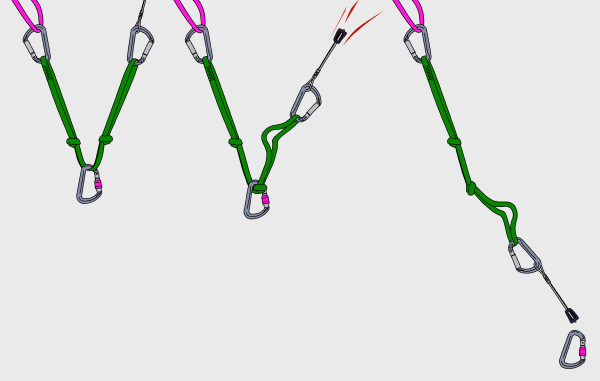 2) It can be difficult to clip another carabiner into the main point of a sliding-X when it is weighted. If you must do so, make sure you have clipped the carabiner through the sling in exactly the same way as the original carabiner. A much better alternative is to use the quad anchor.

There are many ways of incorporating the sliding-X into an anchor. However you do it, make sure that if any piece failed, the resulting anchor shift:
- Is minimal
- Causes the remaining pieces to re-equalize
- Will not cause you to lose control of the belay

Step 1
Clovehitch a double-length sling to the lower right piece. 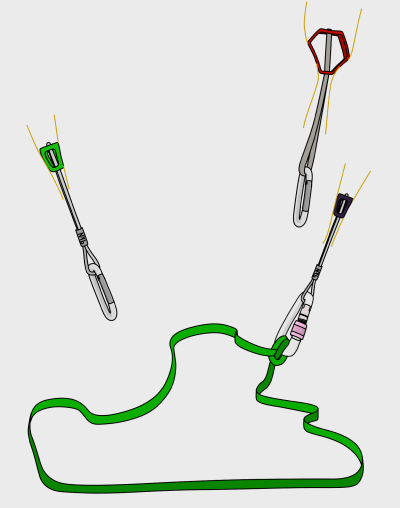 Step 2
Clip the sling through the upper right piece. 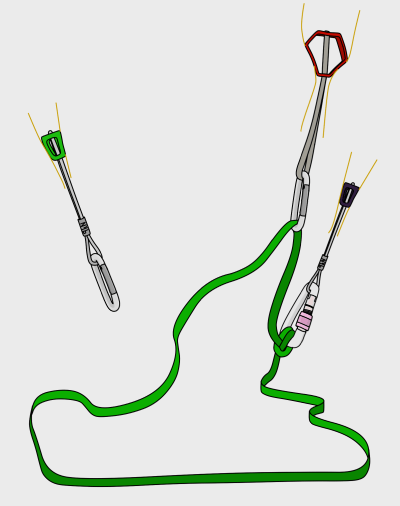 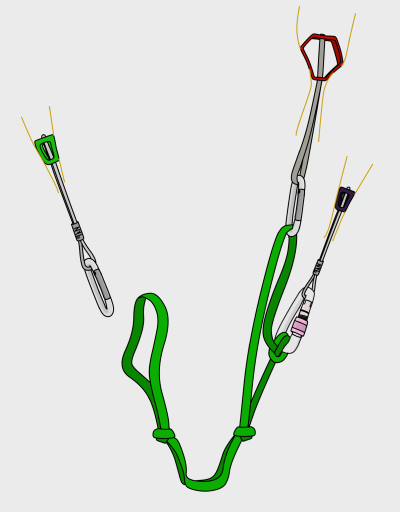 Step 4
Clip the sling into the left piece.

Adjust the knots so they limit extension while allowing for some directional movement. 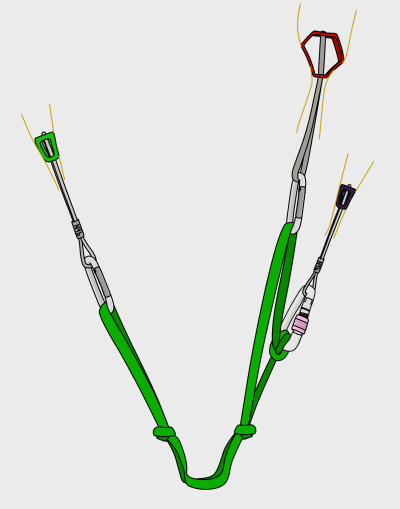 Step 5
Put a 180 degree twist in one of the master point strands and clip a carabiner through both loops as shown. 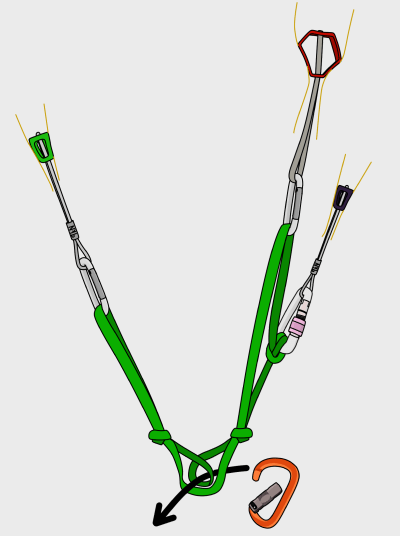 You could also equalize four pieces by clovehitching another piece on the left.

You may need to adjust the extension-limiting knots after adding the fourth piece. 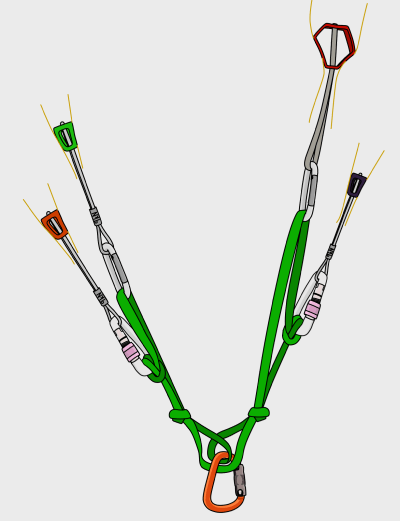 If your belay consists of one bomber piece (the bolt) and four mediocre pieces (the micro nuts), you could use an arrangement like this.

This method equalizes the pieces so the bolt takes 50% of the load and the four micro nuts take 12.5% each. 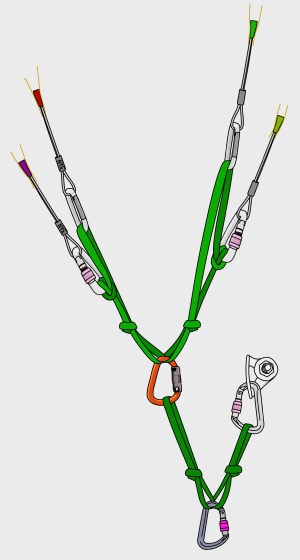