This 'Lead Climbing' article is part of the book - Sport Climbing Basics.

Lead climbing a sport route is similar to lead climbing at the indoor wall, but with a few more factors to consider.

The rope-end carabiner usually has a curved gate and is 'held in' with an elastic or rubber loop.

It's important not to get these two carabiners mixed up. The sharp edges of bolts can notch the bolt-end carabiner, which will damage your rope if you swap them over.

We recommend using quickdraws with different coloured carabiners so it is easy to identify them. 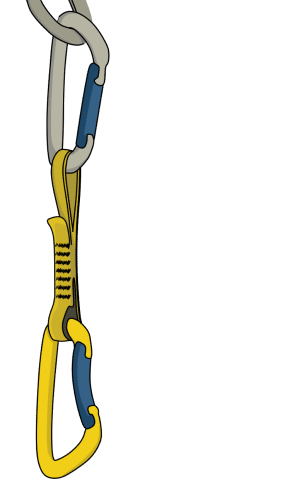 Clipping the Rope into Quickdraws

The easiest way to clip a quickdraw is to place your fingers around the back bar of the carabiner, then use your thumb to flick the rope through the gate.

The pressure of you pushing the rope on to it will open the gate; you don't need to open it with your fingers.

If you're clipping with your other hand, you'll need to hold the back bar with your thumb and use your fingers to flick the rope through instead. 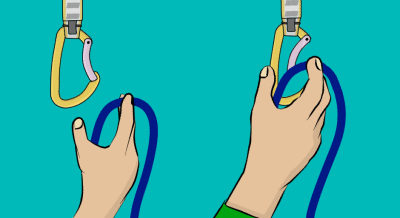 Another way is to steady the carabiner with your middle finger and then flick the rope through with your thumb.

Make sure you're comfortable clipping quickdraws with both hands, in either direction. 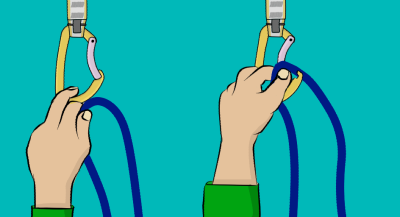 You should use the correct length of quickdraw on each bolt so your rope runs as straight as possible without creating unnecessary fall potential.

If the bolts are in a fairly straight line, use short draws to limit your fall potential.

If the route wanders a little, use longer draws on the bolts which are furthest from the center line. This keeps your rope running straight and therefore reduces rope drag.

If a bolt is far to one side or underneath a roof, use an extendable quickdraw. 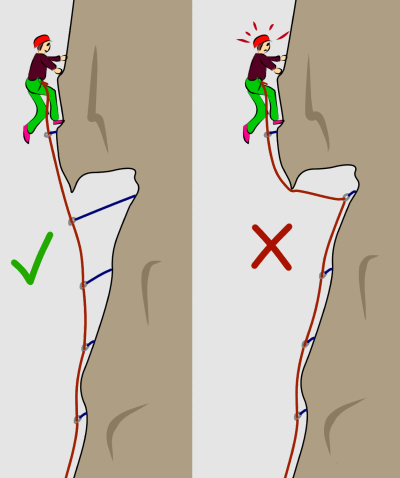 It can be tempting to pull through meters of rope to clip way above your head. But doing this means there's a lot of slack rope in the system- you'll fall a lot further if you slip while clipping.

It is often safer to do one more move and then make the clip. 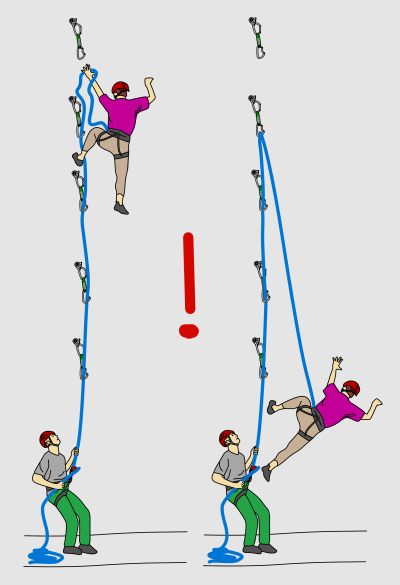 When lead climbing above a quickdraw, make sure the rope is running to the side of your legs. 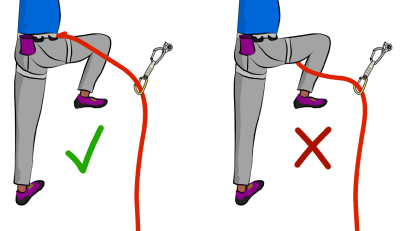 If you fall with the rope around your leg, it can flip you upside down, causing you to hit your head on the wall and get 'rope burn' behind your knee. 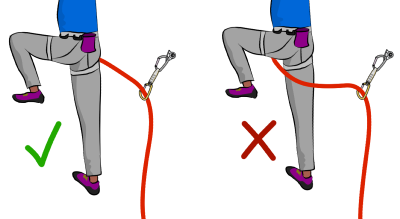 If you will be traversing far to the left after clipping a draw, it’s better to orientate it so the rope-end gate faces right, and vice versa.

If the gate faces in the same direction as you, there is a greater (but still very small) chance of the gate opening in a fall. 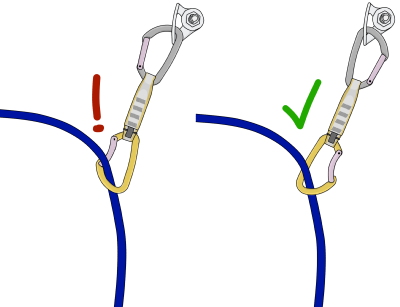 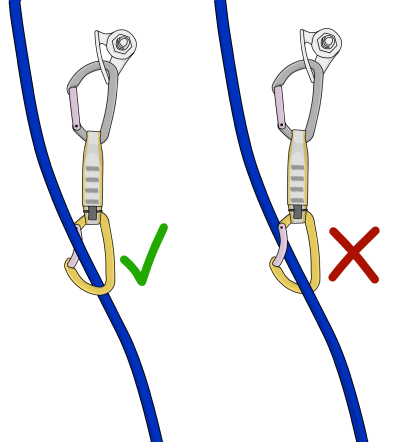 If you clip it the wrong way round, the rope could snap through the carabiner's gate if you fall when lead climbing. This would unclip the rope from the carabiner. This is known as 'back clipping'.

If you're belaying a leader, keep an eye out for them accidentally back clipping, and let them know if they have! 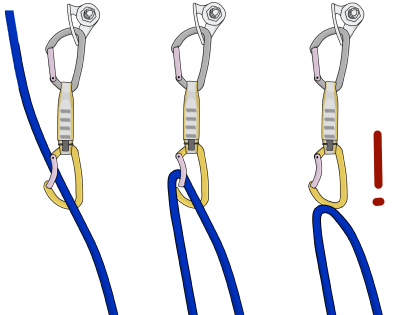 A carabiner is ‘cross-loaded’ when it is loaded sideways. This makes the carabiner much weaker, meaning that it could break during a fall.

A common cross-loading situation is when the rope-end carabiner moves out of position. The rubber attachment is designed to stop this – check your draws to make sure the rubber is still intact. 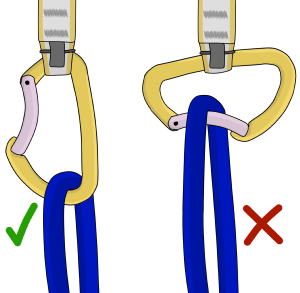 Carabiners can also be cross-loaded over an edge of rock. Use a longer quickdraw to avoid this. 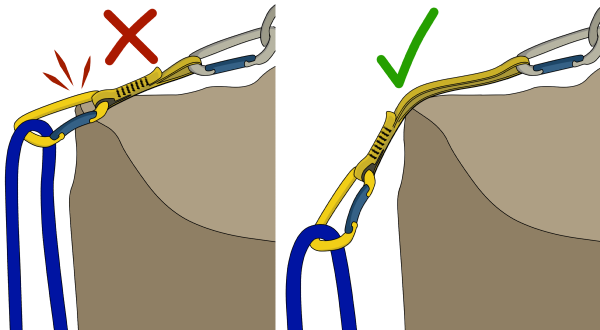 Hooking-up is when the square edge of a bolt hanger gets caught in the hook of a carabiner’s nose or the recess between the gate and the nose.

A hooked-up carabiner is extremely weak and could break during a fall. 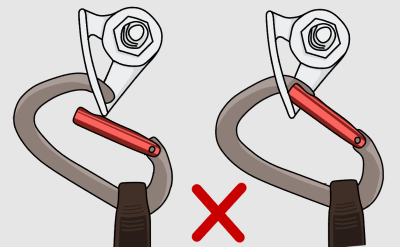 A carabiner with a hooked nose design, a shallow angled top bar or a recess between the gate and nose is more likely to get stuck in this orientation. 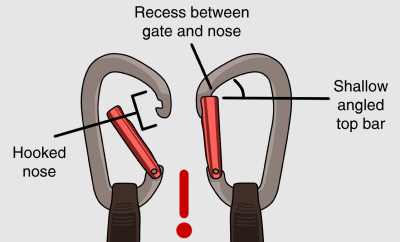 Check you have clipped each bolt correctly and avoid using carabiners with these features. 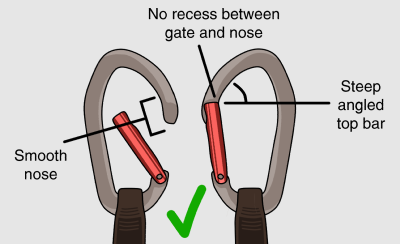 Make sure the carabiner's gate has snapped shut after you've clipped the rope through it. If it stays open, the carabiner is just as weak as if it was cross-loaded.

This can happen if the gate is resting against a rock edge. Use a longer quickdraw. 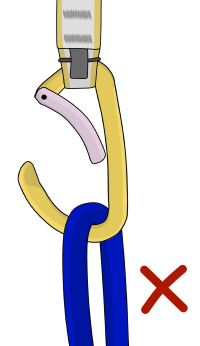 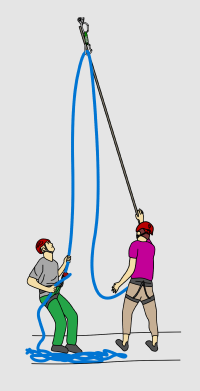 If clipping a critical bolt (e.g: when accidental unclipping would result in serious injury), it’s a good idea to clip two draws into the bolt, if they’ll fit.

Clip the longer draw on top so it won’t be loaded unless something goes wrong with the other one.

Alternatively, you could have a dedicated ‘critical’ quickdraw which has screwgates on either end. 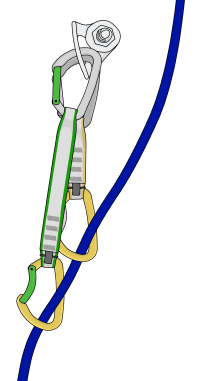 Sport climbs are not always bolted as well as gym routes. Outside, bolts tend to be less evenly spaced, and further apart.

Unfortunately for the beginner, the easier routes at a crag are sometimes sparsely bolted. This is because they are considered as ‘warm ups’ and therefore the leader is unlikely to fall off. Try to stay away from runout routes when you’re starting out.

Be aware that some bolted routes are designed to be supplemented with trad gear to make them safe. You may also need trad gear to build an anchor at the top of these routes. These are not ‘sport’ routes. Make sure you know what you’re climbing before you leave the ground.

Never clip the lead rope through a carabiner which has a sling, cordelette or other nylon item attached.

If you fall, the rope will rub over the sling. This will damage the sling and also your rope.

If a climb is too difficult or dangerous, and you can’t reach the top, the easiest and safest way to bail is to leave carabiners on the top two bolts.

Simply replace your quickdraws on the highest two bolts with single carabiners. If a bolt is dubious, clip a third too.

Lower down and remove the rest of your quickdraws. It’ll cost you a couple of carabiners but it is far safer than lowering from a single bolt.