'How To Use Half Ropes' is part of the book - Trad Climbing Basics.

Half ropes (also known as double ropes) are thinner than normal 'single' ropes, and are designed to be used as a pair. 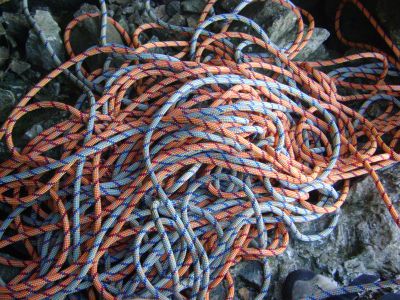 Advantages
- Rope drag is reduced on wandering routes where the protection is not in a straight line
- You have more options for protecting your partner when they follow traversing pitches
- They double the length of abseil you can make
- If one rope is cut on a sharp edge, you still have the other to catch you

Disadvantages
- Involves more forward planning
- More difficult to belay
- It's possible to get into a situation where only one half rope would stop you from hitting the ground. They are not designed to be used like this (This is explained later) 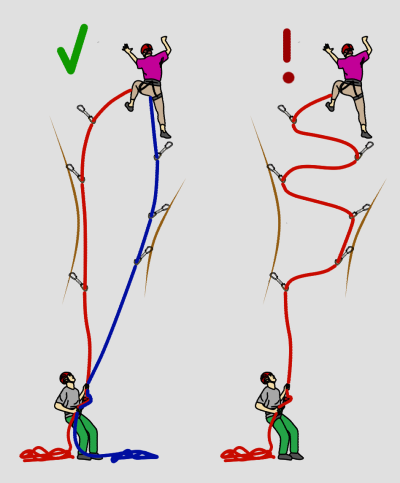 Half ropes are marked by a ½ symbol on the end of the rope (a single rope will have a 1 symbol).

Twin ropes are also available. BE CAREFUL! These are not designed to be clipped individually like half ropes. Instead, you must clip them both into the same carabiners as you climb. They're mainly used for ice and mixed climbing. 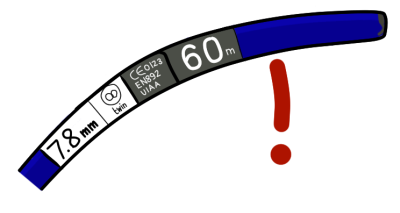 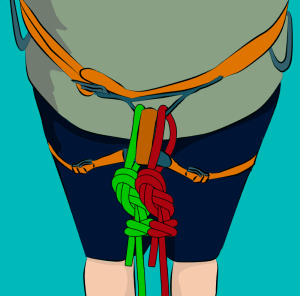 Designate Your Ropes
Tie in to half ropes just as you would a single, but with one rope on either side of your belay loop.

The left rope will be used to clip gear on the left side of the route, and the right rope is for gear on the right.

Traversing
On a traversing route, it's best to have an 'upper' and a 'lower' rope. The upper rope can help protect the second from taking an enormous sideways swing.

When there are sections of down-climbing, the second will often have worse fall potential than the leader. Plan ahead and place gear high on the upper rope to protect the second. 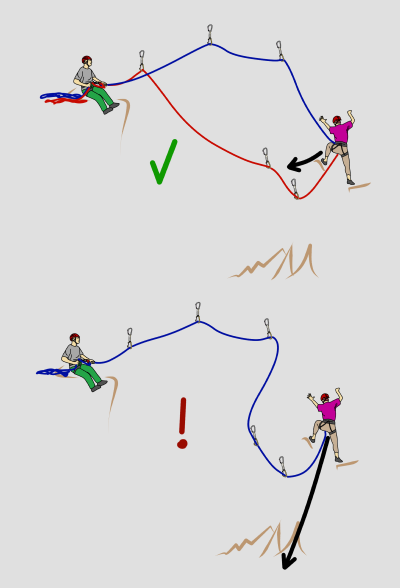 Straight-Up Pitches
On a straight-up pitch, clip your half ropes alternately to each piece. This way, you never rely too much on one rope and you never pull extra slack into the system when clipping a high piece.

Crossing Ropes
Beware of crossing the ropes as you clip gear. It’s possible to trap one rope around a piece of gear, creating very bad rope drag. 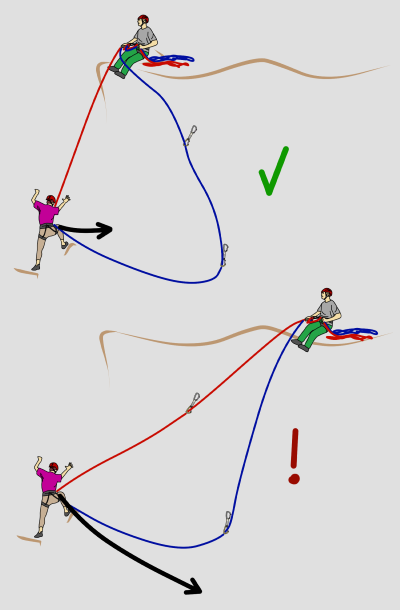 Belaying the Second
To belay with half ropes, you'll need an 'ATC style' belay device which has two slots in it. You cannot use a GriGri.

You'll often need to take in or give slack on one rope more than the other to keep the ropes equally tight on your partner.

Simply go through the normal belaying motion, but hold one rope tight while letting the other slide through your hand. Obviously, never let go of either rope. 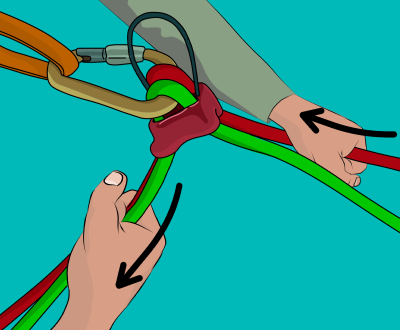 Another option is to use guide mode. 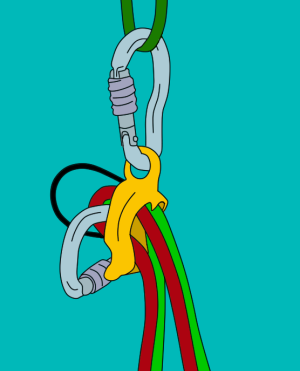 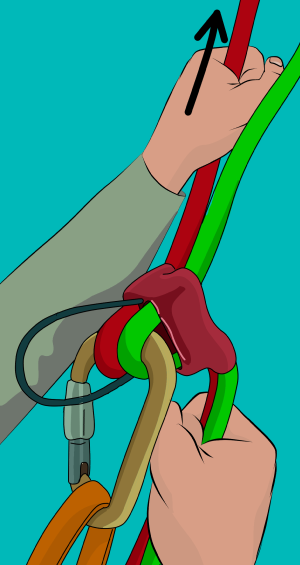 Lead Belaying
Sometimes you'll need to feed out more slack on one rope than the other, as the climber pulls it up to clip.

Once they've clipped one rope higher than the other, you'll need to take in that rope, while giving out slack on the other.

This can be pretty tricky to do well and takes some practise. It helps to keep the two ropes separated in your hand above the belay device. Remember to keep hold of both of them together in your lower hand.

Using Half Ropes in the Belay

Half ropes make building a gear belay much easier, as you can use both ropes to equalize yourself to the gear. Rather than having one central point that you tie into, you can have two, with one rope going to each. Use a clovehitch to attach yourself to the screwgate carabiner at each main point.

Can You Fall on Just One Half Rope?

There's no simple answer to this. Half ropes are designed to be used together and are fall-tested by the UIAA with a smaller falling mass than for a single rope. The theory is that one rope will take most, but not all, of the force in a fall.

In reality, all of the force goes on one rope if you fall.

You should be very cautious of creating situations where only one rope would hold a large fall. This situation would also reduce the redundancy that is inherent in half ropes on complicated terrain, where there is any risk of a rope being cut by a sharp edge.

If you need to use half ropes 'separately' (e.g. if you have to clip gear to one rope for the first half of a route and then use the other rope for the last half) you should consider using two single rated ropes instead of a pair of halves.

We also recommend using two single ropes (instead of two half ropes) if you are climbing as a team of three.

Some ropes are available that are rated as both a single and a half rope; a perfect compromise!

The Statistics
For a single rope to pass UIAA testing, it must hold five falls of 80kg at a fall factor of 1.77. A half rope must hold the same five falls at the same fall factor, but only with a mass of 55kg.

If half ropes are tested as single ropes (with the full 80kg), most hold between one and three falls before failing.

This means that half ropes are safe to fall on individually. However, they shouldn't be relied upon to hold massive whippers. If you were to take a large fall on one half rope, you should retire that rope afterwards. 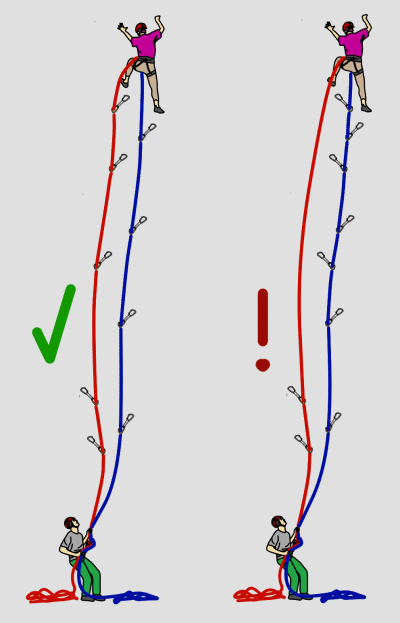 2 thoughts on “How To Use Half (Double) Ropes”