This 'Extendable Quickdraws' article is part of the book - Trad Climbing Basics.

Extendable quickdraws (or alpine draws) are usually made from a 60cm sling and two snap gate carabiners. They can be used either as a short draw or fully extended, meaning it's quick and easy to extend your gear to reduce rope drag without carrying extra slings.

It's great to carry at least a few of these on trad routes instead of fixed length, shorter draws. You could also opt to only carry extendable draws, particularly for alpine routes.

How To Make Extendable Quickdraws

To make an extendable quickdraw, simply attach both carabiners to the sling, then pass one biner through the centre of the other one, clipping the extra two loops of the sling through it at the other end. This can now be racked on your harness like any other quickdraw.

When choosing carabiners and slings for your extendable draws, there are a few things to bear in mind. You should have a gear carabiner and a rope carabiner, just like you would with normal quickdraws.

You'll need to pick different coloured carabiners so you can distinguish between them. Keeping them consistent between all your draws is good – try silver for the gear end and your favourite bright colour for the rope end. You could try marking one end with tape, but this could be really hard to see whilst hanging on by one finger, and can easily wear off.

We prefer making extendable draws with thinner dyneema slings (6 or 8mm) as they fold up more neatly than thicker dyneema or nylon, reducing bulk on your harness. They will wear out faster than thicker versions though, so be prepared to replace them more regularly. 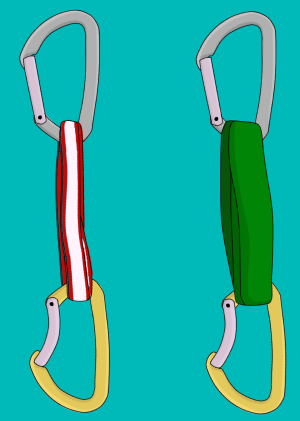 How To Use Extendable Quickdraws

To use extendable quickdraws, clip the draw to your gear, then slip two loops of the sling out of the rope-end carabiner. Pull it out to full extension, then clip the rope in. 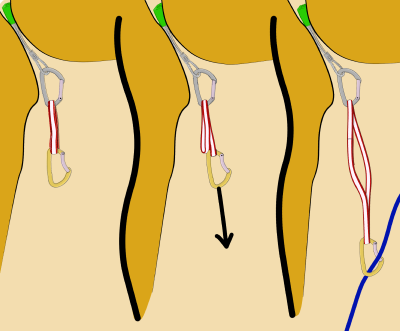 Occasionally, the sling can become twisted which can result in it being looped around the gear carabiner. It's OK to use it like this if you're really pumped and need to make the clip quickly, but much better to sort it out if you can.

If you fall while the sling is tangled like this, the strands of it will slide over each other, causing it to weaken, just the same as if it was knotted.

Many short draws have a loop of elastic at the gear end to hold the carabiner firmly in place. It's important NOT to use one of these elastics on an extendable quickdraw. If it's twisted in the wrong way it can end up with the sling attached only with the elastic, not clipped through the carabiner. This is easily missed and would be disastrous if you fell on it! 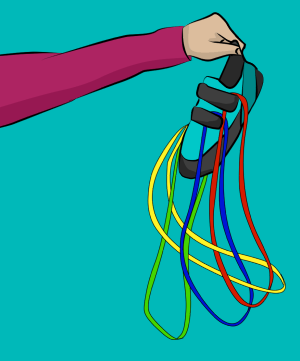 Top Tip
The velcro on rock shoes quickly kills dyneema slings, so try not to bundle them all into your bag in one big messy heap!

How To Rack Extendable Quickdraws

When following a pitch where your leader has used extendable draws, you can either re-make the draw as you go and rack it onto your harness, or simply sling the whole thing over your shoulder – much easier in a tricky position. Some people prefer to carry them on lead like this too, rather than racking them on their harness. 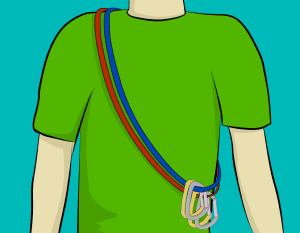 One thought on “Extendable Quickdraws”