Check out the full big wall video course, or download the e-book.

Every climb receives a grade which determines the length of time and commitment required to climb it, with big wall routes covering grades V to VII. With only three grades to describe the length of every big wall route, the system doesn’t work so well. Generally, Grade V’s require one or two nights on the wall and Grade VI’s require two to seven nights. It is recommended to start with a few Grade V’s before trying a Grade VI. Grade VII is reserved for extremely difficult aid-intensive routes on huge walls in remote environments, often with hostile weather and no possibility of a rescue.

The grades range from A1 to A5, and from C1 to C5. 'A' grades refer to anything that requires the use of a hammer (e.g: placing pitons or copperheads), whereas 'C' grades are used if the pitch can be climbed without using a hammer (i.e: ‘clean'). A1 is super safe. A5 is super dangerous.

In reality, the grading system doesn’t really work. Aid ratings are based entirely on the danger involved. The rating does not tell you how physically challenging a pitch is, or how difficult it is to figure out the moves.

Unfortunately, there is no way of accurately measuring how dangerous a pitch is – we can only guess. This works fairly well up to A3. But in the harder grades, it becomes a measure of fear. And fear is different for each climber and each situation. Aid grades of A5 or harder impress the masses, but no climb can really be given the A5 rating without proof of certain death if you fall. Those tiny copperheads could hold, but you don't know until you fall off. And no aid climber is crazy enough to test this theory. Not even Ammon McNeely.

A grade of A5 cannot even be confirmed if someone falls off. This is because every climber protects pitches slightly differently. Some climbers place more gear, equalize pieces and add shock-absorbing slings. Other climbers back-clean, don't bring enough gear or miss out key placements in the pursuit of moving faster.

A3 gets upgraded to A4 due to fear. A5 gets downgraded to A4 due to lack of proof. Therefore, the grade of A4 becomes a vast spectrum of difficulty, which is only possible to describe when you've climbed enough of it. Here's my view: 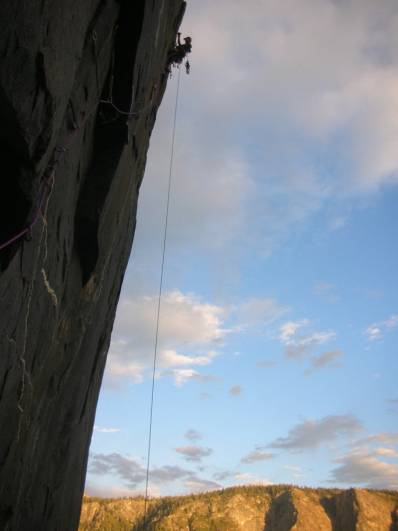 A grade of A4 could mean there is one well-travelled and straightforward section of fixed gear in solid rock which is really A2 if you spend time climbing it well (e.g: crux pitches of Lost in America, Zenyatta Mondatta, many El Cap trade routes). Or it could be a 30+ pitch nightmare of rotten rock and death blocks. On an average pitch, the unfortunate leader will suffer in a perpetual state of mind-boggling terror as they sketch from one horrendous placement to another.

It will often take over 30 minutes to construct a science-project placement which enables the leader to tremble one foot higher up the 3000-foot wall. Fear builds exponentially as they become further and further removed from anything secure and completely uncertain that they will ever reach a belay. After 8 hours in a new and unfamiliar state of panic, dehydration and delirium, the exhausted leader will be forced to mantle out of their aiders into a long free climbing section of unknown difficulty, protected below by a string of worthless ironmongery. This must be climbed while wearing a massive clustered aid rack.

Balanced at the top of these desperate runout free moves, the leader must stretch high to place a tiny copperhead and transition back to the final section of improbable aid moves to a belay which must be constructed from pitons and duck tape. Or at least that’s how I felt on The Central Tower.