This 'hexes' article is part of the book - Trad Climbing Basics. 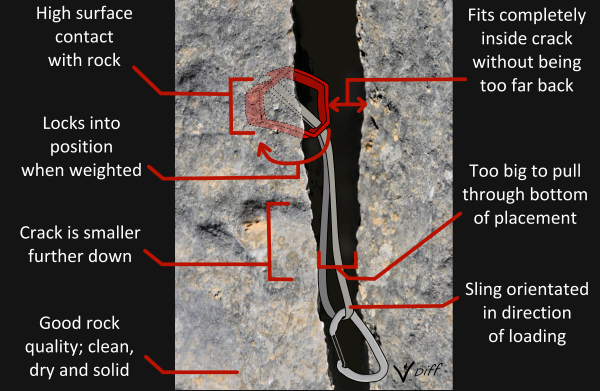 Hexes are an old type of climbing protection that are seldom seen on climber's racks since the introduction of cams. However, they do have advantages over cams in certain situations.

The main advantage of hexes is they will work in dirty, wet or icy cracks where cams are likely to slide out. They are also lighter than the equivalent sized cam. This is especially noticeable in the bigger sizes. They cost a lot less too.

They can be used 'passively' in exactly the same way as nuts; by being wedged into constrictions and tapered cracks.

However, they can also be placed in 'active mode', so that they 'cam' into the crack. When a hex is placed as shown, and pulled downwards, it tries to rotate (green arrows). This rotation applies increasing pressure outwards onto the side walls of the crack (white arrows), which locks it in position. 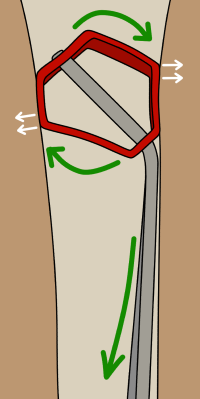 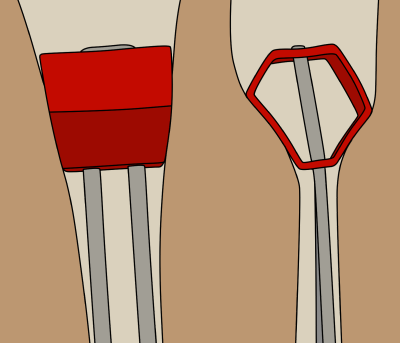 Look for constrictions and treat them just like a large nut. They can be placed sideways or straight in. As with nuts, give the hex a gentle tug to seat it in position, then extend it with a quickdraw.

When using a hex in active mode, it's still good to place it in a constriction; they are fairly unreliable in perfectly parallel-sided cracks. (Cams are much better in parallel cracks).

However, because of the hexes' camming action, the constriction doesn't need to be as sharp as it would be for a nut placement. 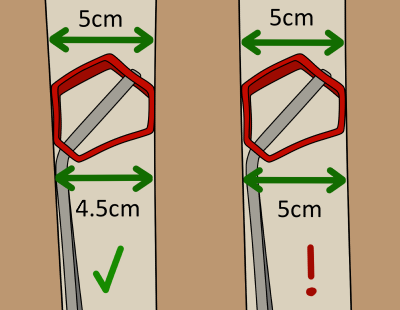 What you’re looking for is a crack that you can just fit the hex into. Place the hex so that it has opposite sides making contact with either side of the crack, with the sling coming out diagonally from the bottom.

The important factor to take into consideration is what orientation to use. Try placing it with different sides touching the crack. Place it in the way that fits the tightest, and which 'cams' into position the most when the sling is weighted. 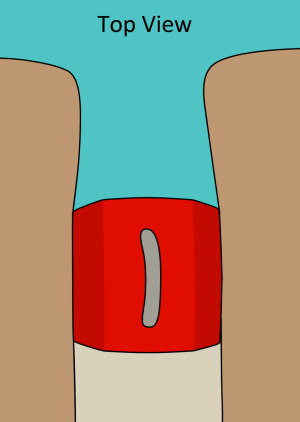 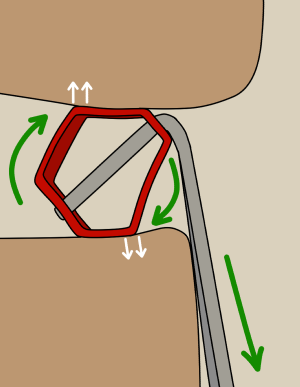 Hexes can be used in horizontal cracks in the same way as vertical cracks. It's often better to have the sling coming out of the top, so it doesn't rub over the edge of the crack.

A hex can be removed the same way as a nut in most cases. However, if a hex has rotated into place tightly, you'll have to reverse the way it rotated in order to retrieve it.

Don't be afraid to hit them hard with your nut tool; they're very durable. 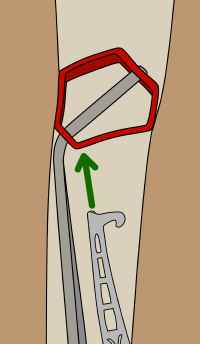 Most of the time, you'll only be carrying one or two hexes. In which case, you can either put them on the same carabiner with your big nuts (for small hexes), or clip them further back on your harness on their own separate carabiner (for bigger sizes).

If you must carry a full rack, they can be racked in groups of 2-4 per carabiner. 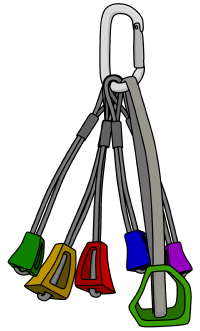 Top Tip
If your big hexes are jangling around, slide the hex to the middle of its sling and clip both ends together. This way, the metal part only hangs down half the distance. 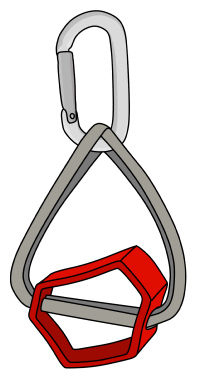