'How To Be a Better Belayer' is part of the book - Sport Climbing Basics.

Just as people pick up ‘bad habits’ after they pass their driving test, climbers often get lazy with belaying once they have learnt the basics. Here are some tips to keep your climbing partners alive.

Keep an eye on the climber so you can brace yourself if they fall, or give slack at the exact same time as they are clipping a high piece. If you can’t see the climber, listen for commands from them and watch for movements in the rope.

Pay special attention when the leader is clipping the rope into a quickdraw. The extra bit of slack you have out makes the leader vulnerable to a longer fall if they slip just before making the clip.

You cannot give complete attention to the climber if you are talking to someone else. Likewise, avoid starting a conversation with someone who is belaying, and walk well around them so you don’t compromise their belay. 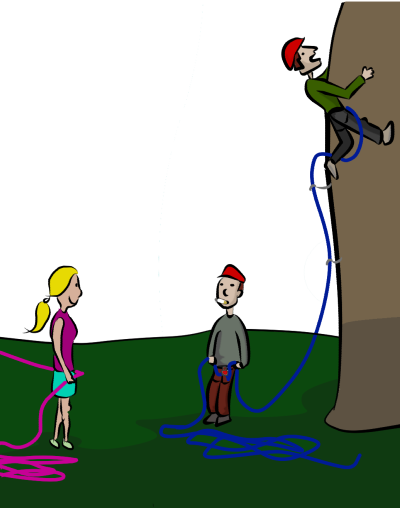 Don't Let Go of the Rope

Use your other hand to wave to friends, get something out of your pocket or scratch your butt. Or better yet, just wait until you’ve finished belaying.

This is a common problem with assisted-braking belay devices, where people get comfortable using them and forget that they do not always auto-lock.

The bottom line: If the climber falls while the belayer’s hand is loose or off the rope, they probably won’t catch the fall. 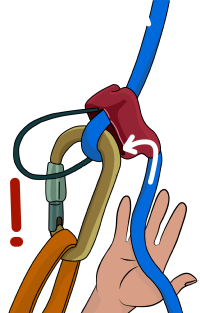 You should stand in a "ready" position, so that if your climber falls or needs some help, you can react quickly to the situation.

Let the climber know about any dangers or mistakes they are making. Look out for back-clips, if their leg is around the rope or if they should extend a quickdraw.

Keep an Appropriate Amount of Slack

When lead belaying, the rope should always travel outwards and upwards from your belay device to the first piece of gear. Lazy belayers often give too much slack so they can wait longer before having to deal with the rope again.

This can be incredibly dangerous for the leader. Take and give slack as your climber moves to maintain the correct arc in your rope.

When top rope belaying, keep the rope fairly tight on the first few moves so the climber doesn’t hit the ground if they fall. 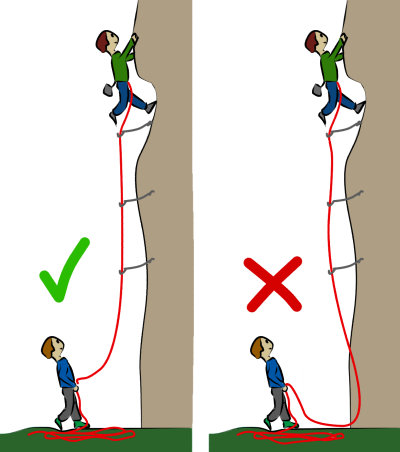 If you are not certain how long a pitch is, or how long your rope is, you should tie into the bottom end of the rope. This ‘closes’ the system.

Alternately, tie a knot in the free end of the rope.

At a busy crag, the climber and belayer should call each other by name. This confirms that any shouted commands are actually meant for them.

You won’t always be able to see or hear your partner very well. Shout the climbing commands loudly to be clear.

You and your partner should have a pre-arranged signalling system for situations where you can’t hear each other.

The problem with this method is that it is possible to mistake a leader’s jerky movements or tugs for slack as the off-belay signal. If there’s rope drag it can be even more difficult to decipher these movements in the rope.

Keep the climber on belay until you’re certain they are safe. When you feel the same signal repeated many times, you’ll know what the leader is trying to say.

The bottom line: Never take someone off belay until you’re sure they are off.

You should stand in a position fairly close to the wall where you can take a few steps forward or backward to give slack or take in while still locked off. Don't sit down, lie down, or face in the wrong direction.

If the climber is to the left of the first piece of gear, you should stand to the right to avoid being hit by rocks, dropped gear or their feet. 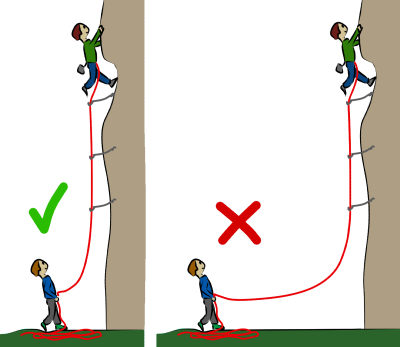 On steep routes, a ‘soft catch’ is a common technique which makes the fall much more comfortable for the leader and stops them from slamming into the rock when the rope gets tight. The leader will fall further during a soft catch, so make sure to only use this technique on steep, overhanging routes where you are certain the leader cannot hit anything.

To soften a fall, belay with your knees bent. Straighten them during a catch, allowing the weight of the falling climber to pull you upwards slightly. You could even take a small hop just as the rope begins to pull tight.

However, there are many situations where a dynamic belay is unsafe; A lightweight belayer might be pulled upward into a roof or a piece of gear which could disengage a belay device, or the extra rope could cause the leader to hit a ledge or the ground. Watch your partner carefully and learn to recognize how much of a dynamic belay (if any) is appropriate. 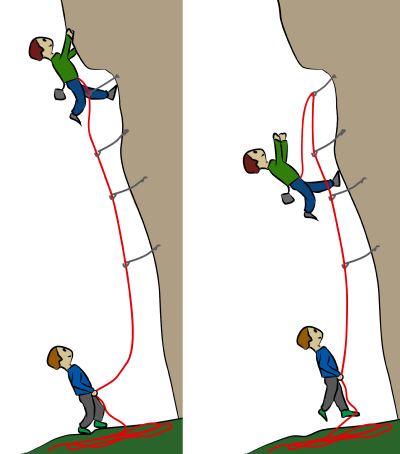 To combat this, the lightweight belayer can anchor to the ground. This technique, however, reduces the belayer’s ability to move around the base of the route and give a soft catch.

A good compromise is to attach to a ground anchor with enough slack to move around and give a soft catch if needed, but not so much slack that you would be sucked into the first piece of gear.

On ‘runout’ routes where a fall onto a ledge or the ground is possible, the belayer can run backwards away from the route if the leader falls. Remember to keep both hands on the rope in the locked-off position as you do so. This takes rope out of the system far quicker than pulling slack through a belay device, which means the leader will fall less distance.

This technique is best used on sport routes, rather than trad, since it puts a lot more force on the top piece of gear and could 'pluck' out the bottom piece. It results in an uncomfortable, abrupt fall, but it is far better than hitting the ground. 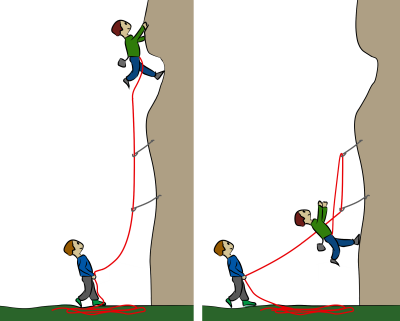 Before the First Piece of Gear

Before the leader reaches their first piece of gear, you'll need to 'spot' them, just the same as if they were bouldering.

Make sure to have enough slack in the rope so they can climb up to their first piece. 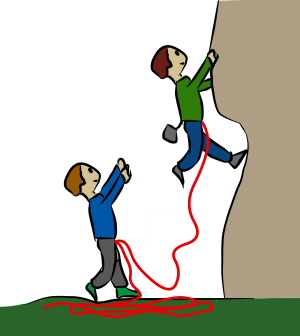 Make it a habit to check yourself and your partner before each climb. 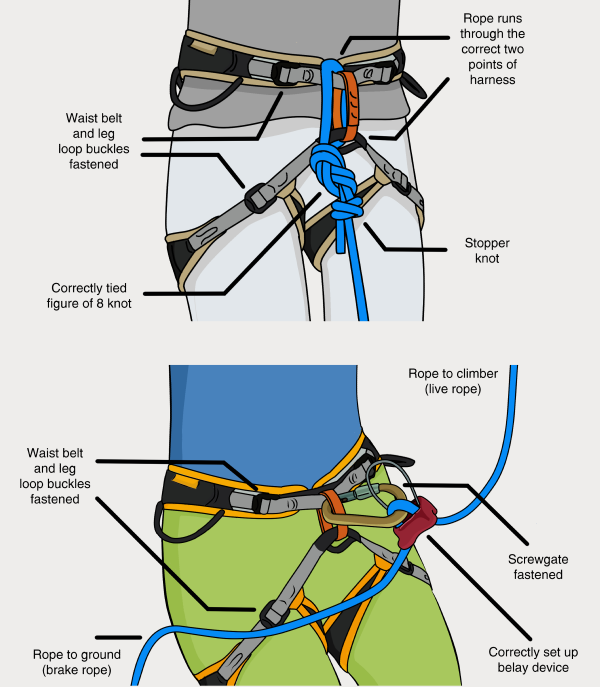